The Monastery of San Salvatore

The Monastery of San Salvatore 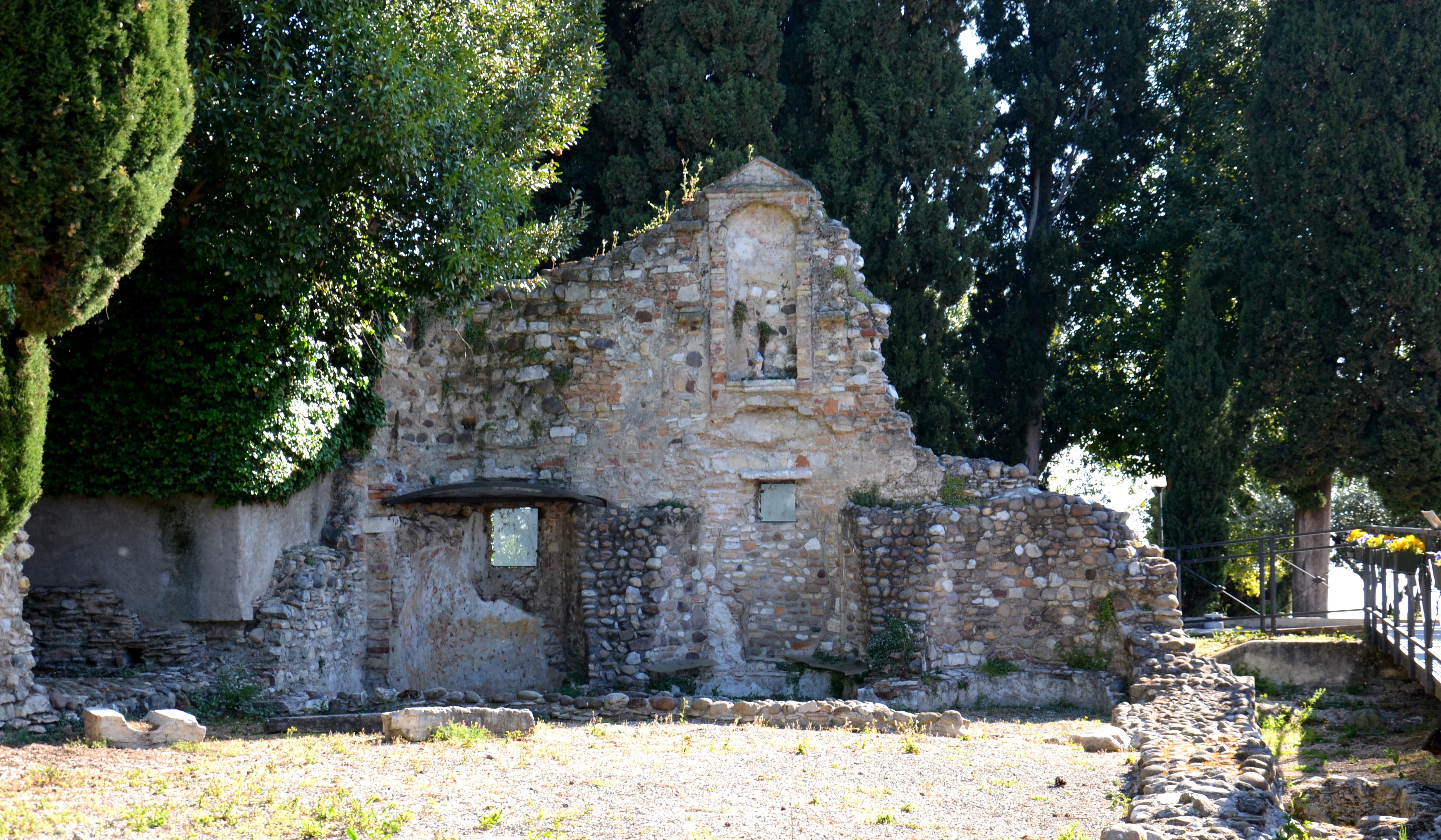 The monastery of San Salvatore that was founded by Ansa, wife of the Lombard king Desiderio, in an area that was previously occupied by workshops and residential houses, at the foot of the Cortine hill and within the castrum of Sirmione. The first document that regards the monastery is a diploma of Charlemagne of 774, in which the “small monastery” recently founded (“novo opere”), is donated to the monastery of Saint-Denis by the Emperor. The church, that in the Lombard era and then in the IXth century, was however subject to the monastery of San Salvatore of Brescia and remained until the end of the XVth century, when it was alienated along with its numerous properties. In the XVIth century the church was in a very poor state and its demolition was proposed, which fortunately didn’t happen and in 1686 it was restored.
In 1856, the count Giovanni Girolamo Orti Manara gave a precise description: a building of 7,15 x 24,15 m in precarious state of conservation, with a raised presbytery, three apses to which one descended by two lateral staircases and a central nave with altar and disturbed burials below the pavement of the church.
At the beginning of the twentieth century the area had become agricultural. In 1909 one could still enter the crypt by means of the seven steps, but “the small plot of land was owned by peasants who destroyed everything”.
A few years later the area was excavated to create a public garden. There was a notable asportation of earth, up to1,5 m of depth. This obliterated not only the floor levels of the atrium and the nave, but also that of the crypt apart from some remnants around the hemicycle of the apse, as were removed also all the burials. In 1959, the Soprintendenza Archeologica restored the primitive aspect of apsidal area, removing the changes made in 1686 that had created a rectilinear eastern wall concealing the original three-apsidal form. The excavation within the crypt uncovered the original frescoes.

In 1984, some trial trenches to the northeast of the church uncovered some walls thought to be of the monastery and the remains of Lombard buildings prior to the monastery that testified the presence of a settlement in this part of the peninsula. There were found many post holes and the traces of a road to the east of the church. The cemetery was to the south of the church, in part destroyed when the elementary school was built in the 1930’s. In 1997-1998 and 2002 about a hundred tombs were excavated, dating from the second half of the VIIIth century to the XVIth century.
The church of San Salvatore is considered one of the most interesting examples of late Lombard architecture.  A single nave, three apsed structure with a crypt, it was similar to the churches of Pavia, Santa Maria alla Cacce, founded by Liutprand and San Felice, founded by Ansa at the same time. Still partially standing up until the first half of the nineteenth century, it now has just the eastern wall corresponding to the apsidal part and the northern wall for up to a height of 2,50 m whilst the eastern tract of the south wall is conserved only at foundation level for a length of about 10 m. 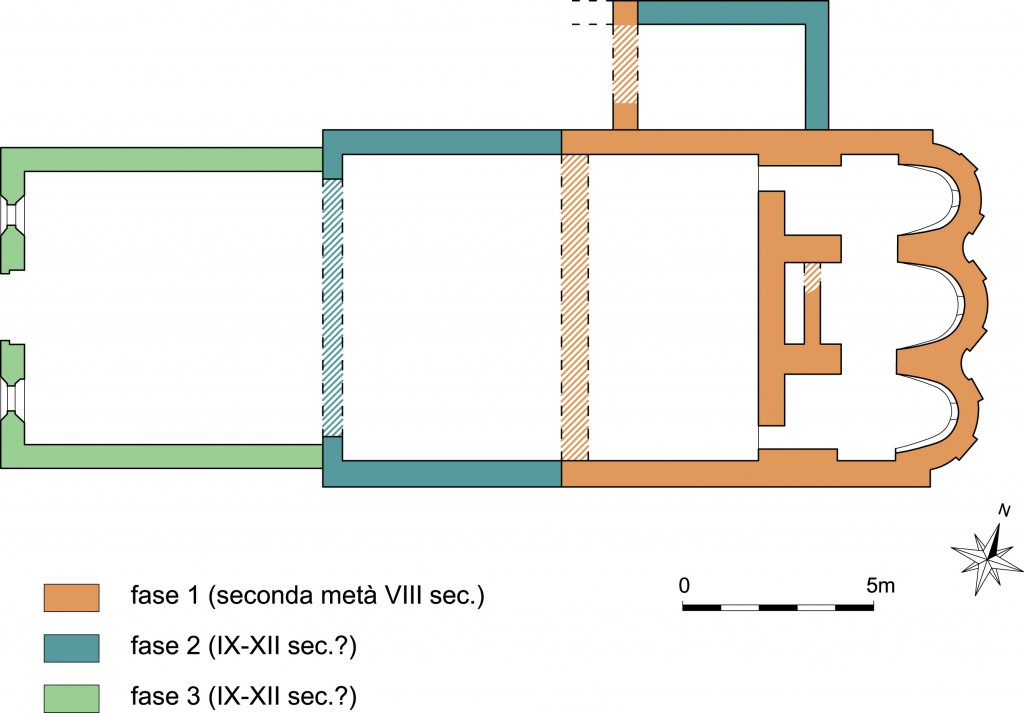 The Sequence
Phase I: second half of the VIIIth century
The original nucleus was of small dimensions, a one naved, three apsed building with a crypt. Of this church, there is conserved the perimetral northern wall for a height of 2,50 m, part of southern perimeter in foundation and the eastern wall for the height of the crypt (about 3 m). Nothing has remained of the façade, it is possible that it was located where there is now a break visible in the northern wall, in that case the church would have the dimensions of 11,50 x 7,15 m.
Of the crypt, there has survived the apse and the northern side, whilst the south and the west are reduced to foundation level. The crypt is of the “western corridor” type, with three small semi-circular apses with traces of frescoes from VIIIth century. In the northern apse there is partially conserved an arched window. Two stairways, again in part conserved, led to a corridor that faced onto the three apses, between the stairways was placed an altar in the wall for the custody of the reliques.The ceiling, partially conserved in the northern apse is in vaults of “tufo” and the floor in brick.
A structure of the monastery added on to the north of the church, perhaps a corridor or portico belongs to this phase.

Phase II: IX-XIIth century
In a later period, between the IXth and XIIth centuries, the building was enlarged to the east. This meant the original façade was demolished and the new façade was built 5 m to the west. The construction technique, in approximately regular courses ofmarl slabs, differs from the former walls that used also pebbles and stones of various types.
To the north, next to the church a functional room was added on, using the former structures of the monastery.

Phase III: IXth-XIIth centuries
Successively, to the façade of the church there added on a structure, probably an atrium, 7,5 m long and slightly narrower than the church, the building technique is very similar to that of the second phase and the interior was frescoed, as testified by the labile traces remained.

Phase IV: XIII-XIVth century
In the late Middle Ages the outline of the building doesn’t change, but the above the crypt is completely rebuilt. This is clearly visible in the construction techniques of the walls, the stone slabs and pebbles laid in regular courses is similar to the Scaligeri walls of Sirmione and the late medieval phase of San Pietro in Mavinas, restored in the first half of the XIVth century. With the exception of some changes to the apse windows no other modifications take place.

Phase V: 1686
A restoration of 1686, testified by an inscription remembered by Orti Manara, reused in a substantial modification of the building: in that occasion the three apsed profile of the eastern prospect is changed to become rectilinear, with rounded corners. This is obtained by closing the niches between the small apses of the crypt and in all the points where the early medieval and Romanesque walling was semi-circular. Above the presbytery the walls were rebuilt with irregular technique and rectinearly. Only the interior of the crypt maintained its three apsed aspect