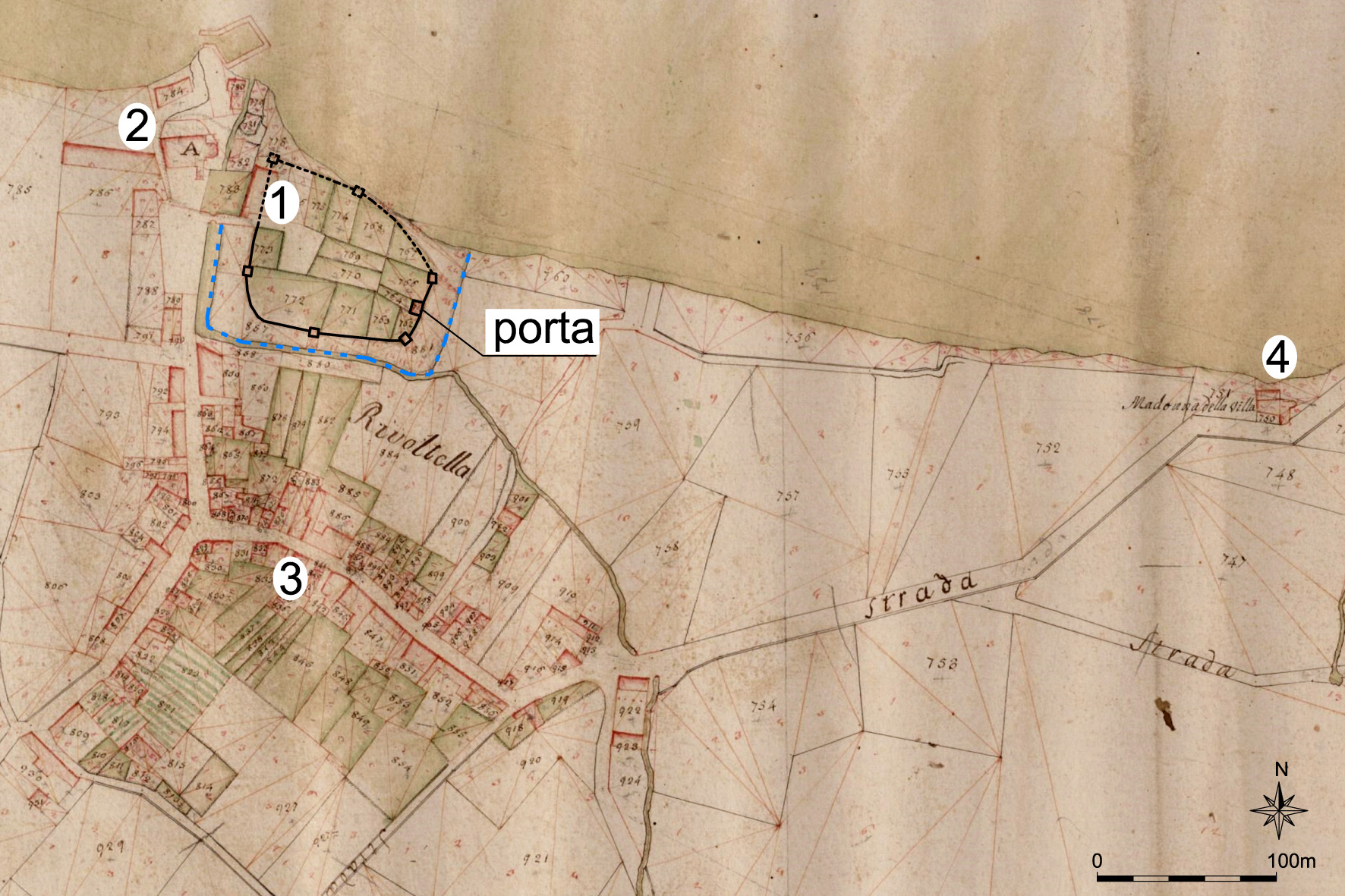 Of the baptismal church of Rivoltella, although recorded in 1145 (Rivoltellacum capellis et decimis, without any other indication) we haveonly later and imprecise information. The first attestation is an inscription on a church bell dated 12 October 1412. The pastoral visits of 1529, 1541 and 1566 speak of San Biagio and SanDonino (that in 1541 was indicated as a “plebe veteri”); in that of 1530 it is named as the baptismal church of San Biagio and San Sebastiano; in that of 1532 it is cited as the parrochial church of San Biagio and San Sebastiano; in other visits it mentioned only with the name of San Biagio, a saint after whom, in the nearby Trento province several churches are entitled dating to the XIth century.
The baptismal church was built outside the castle where there was already a church entitled to San Michele. Reduced to a state of abandon in the XVIIIth century and then incorporated in the rectory, it’s first attestation was in a pastoral visit of 1530, that specified that it was of local men. In 1532 the visitor stated that it was next to the house of the high priest. The castle, that up to 1404 was in the hands of Boccaccio, who were also in possession of Venzago (see file), was built on a promontory overlooking the lakeside. The location explains the name of Ripa alta, from which is derived the diminutive Rivoltella. Here the Roman road (via Gallica), following the profile of the lake, made a characteristic curve that some have linked to the name ad flexum of the mansio, that however could have been at the start of the peninsula of Sirmione, where a map of 1183 of the monastery of Santa Giulia showed a locality Mudazone that most likely alludes to the mutatio = mansio of the road. Of the castle of Rivoltella there remains just the fourteenth century tower; the northern part fell into the lake in the XVIth century.
Perhaps of ancient foundation were another two churches, not far from the baptismal church, built alongside the medieval road that had substituted the Roman road on the lakeside. The first attestation of the church of San Fermo and Rustico (now San Giuseppe, a title added to the other two, as results from a pastoral visit of 1743) in a visit of 1654, but the original name is particularly diffused in the IXth century and is found in the Lower Garda in the castle of Polpenazze (the church was demolished in the XVIth century) and at Scovolo over a Roman villa (in the town of San Felice). Also for the chapel known as Madonna della Villa, cited for the first time in a pastoral visit of 1530, we don’t have any information on its foundation, only its relationship with “villa”, an agglomeration distinct from the castle built along the medieval road from Sirmione to Desenzano. In the same pastoral visit there is also cited the churches of San Girolamo, under the patronage of the family Scaino of Salò and for whom we have no information, of San Zeno, San Donino and San Martino.
Of San Pietro and San Michele there remains only the place-name and only an excavation could confirm the presence of a church. San Giorgio in the pastoral visit of 1530 è diruta; it was located on the boundaries of Lonato in the quarter of Visano (Roman praedial) that in 1770 was also known as San Cipriano and was recorded as such in the Napoleonic registry of landed property.
In the eastern wall of the farmstead San Girolamo renovated in medieval style in the 80’s of the XIXth century, there is a single window, almost identical to that of San Donino, but with the small arch carved from a pillar with interlaced decoration from the start of the IXth century. However the wall with the window has a north-south orientation that is not the norm for early medieval churches that are canonically orientated east west and above all the building is not present in the Napoleonic registry. It is therefore a falsity that has valorised an early medieval pilaster already reused in the Romanesque window, but from which church? The earliest phase of San Girolamo, located to the west of the farmstead, is of the XIVth century and there are not earlier architectural traces. The Carolingian pillar has close resemblances with some elements of the liturgical architecture of Sirmione: perhaps it came from there?

In conclusion, we can only hypothesize (as a point of departure for further research) that the church of San Michele (on which was later founded the castle) dates back to the early medieval times as does the church of Santi Fermo e Rustico, whilst in a second phase (in the IXth century?) there could have been founded the baptismal church of San Biagio and the chapel of Santa Maria della villa. 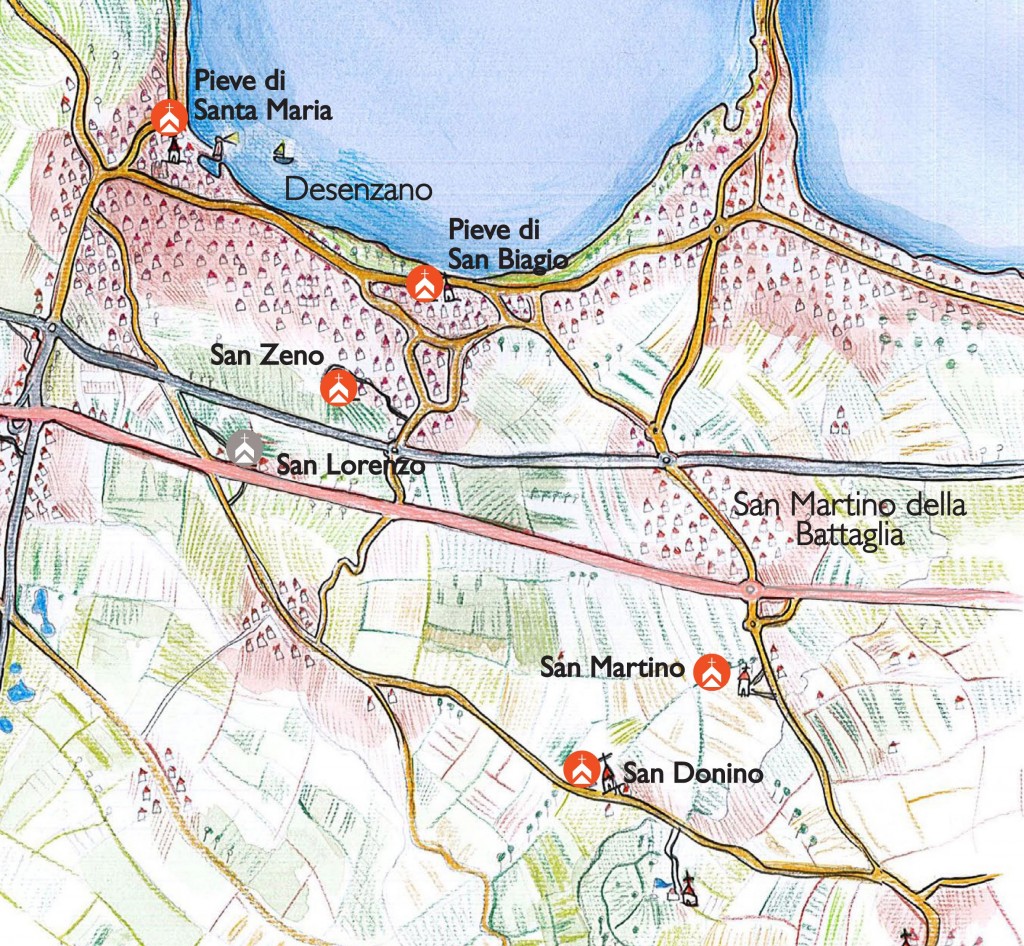