The Baptismal church of Tremosine

Tremosine has conspicuoustestimony of the Roman age, in particular numerous epigraphies that record personalities that are autochthonous or Romanized, fragments of a Roman sarcophagus near the church of San Lorenzo of Voltino, a probable kiln for fusion at the feet of church of San Michele, material scattered in various localities of its vast territory.

In the papal bull of 1187, issued by Urbano III to the high priest Martino, there are indicated as dependent chapels, San Michele, San Lorenzo, San Pietro and San Benedetto, all probably of early medieval foundation. The baptismal church and the first two chapels are in the town of Tremosine, the other two in that of Limone. Santa Maria, San Michele and San Pietro have been excavated. The antichity of San Lorenzo is suggested by the finding within the main altar of relics kept in arca quaedem marmorea parva(pastoral visit of 1578), probably similar to that of San Pietro of Tignale and other churches of the Trento area. The antichity of San Benedetto (that from its title would be tempted to refer it to the homonymous monastery of Leno that had property at Campione and Sommolago), and of its function as a community church one candeduce from the fact that the other church at Limone was, at least in origin, a small funerary chapel of private foundation. 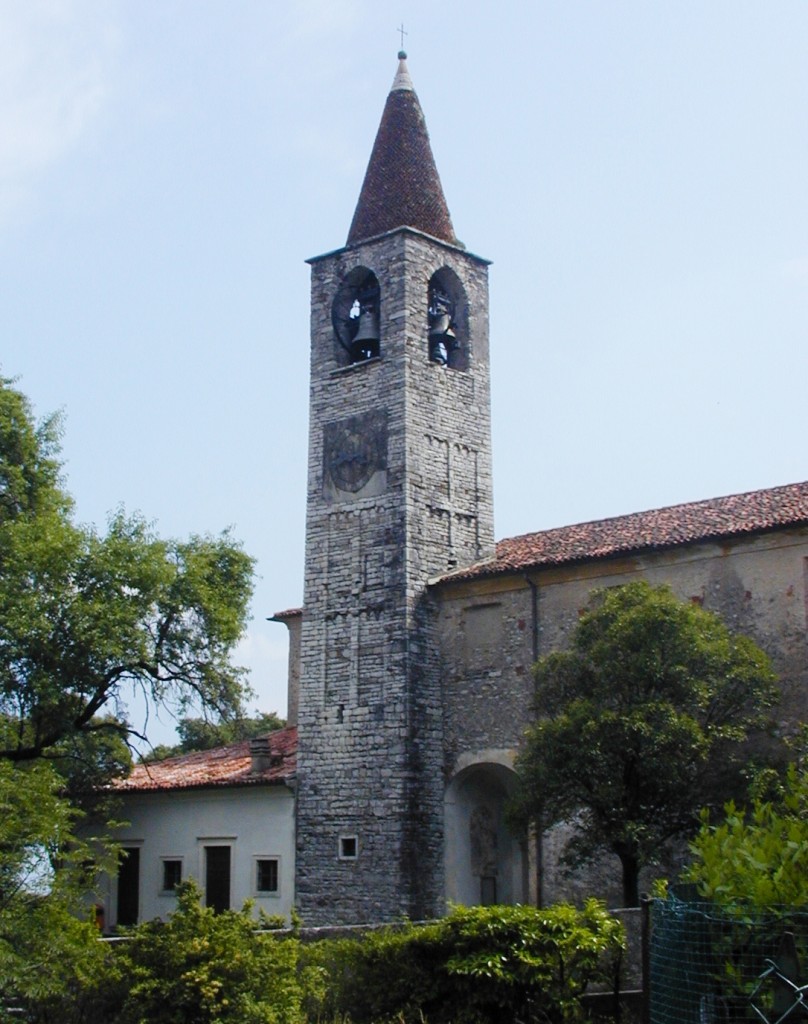 The complex is made up of the church, in its present form datable to the XVI-XVIIIth centuries, the bell tower and the rectory, both Romanesque in style and construction techniques.

The plan of the original church is suggested by the pastoral visit of 1646 by the bishop Morosini that records a baptistry in front of the façade and in axis with the church. The antichity of the baptistry, other than fragment of sculpture from the VII-VIIIth centuries with a geometrical decoration with interlaced small arches that have an inscription to San Giovanni (IVHA…) is confirmed in the visit of Borromeo in 1580 who orders the construction of a smaller font, suitable for the new ritual of baptism by sprinkling; other ordinances were the opening of a window, of a door on the north side and the elimination of the altar of San Giovanni. In 1642 the stone enclosure of the baptistry was still outside the church. It was moved to where it is now after the enlargement of the church in1667-1673.

The presence of a large baptismal basin, probably for immersion,suggests that still in the XVIth century there survived in elevation the early medieval church with one nave and an independent baptistry in front of the façade, a configuration that one can hypothesize for the baptismal churches of Tignale and Salò that takes it back at least to the early medieval age.Only in 1646 is the baptistry demolished when the enlargement of the church occupies its former space.

The interventions of the IXth century regard the bell tower, the rectory and perhaps, as at Tignale, the apse. The bell tower, up to 16,50 m in height, is typically Romanesque, both for its construction techniques in stone blocks of various sizes, laid in regular courses, also for the central quadrangular partition with four subdivisions and a pilaster, crowned by triple small arches in fragments of bricks, also over the slit windows. In the XVth century the actual belfry with ogival arches was built, surmounted by a conical pinnacle, in bricks placed on edge.

The rectory presents externally a wall face in stones of various dimensions laid in regular courses, whilst on the inside the courses, using stones of a smaller size, have pointed joints. It is parallel to the church, from which it is separated by a courtyard, it has a rectangular plan of 17,50 x 9,15 m and it is two storeyed. On the ground floor, the only one that is legible as the first floor has been completely restored, there is now a sole large room with a wooden ceiling, but the presence of two doors on the northern side towards the courtyard with rounded arches in quoins of differing size, suggests that originally the area was subdivided by partition walls, now removed. Another two doors are in the south wall (arched) and the west wall (rectangular). On the south and east walls there are three small rectangular splayed windows with cornices in stone slabs. The building was renovated in 1593by the high priest Domenico Tommasini, as indicated by an inscription on a door lintel. To this phase are referable the windows on the first floor with squares formed by moulded stone and the subdivision of the three rooms on the ground floor covered with barrel or rib vaults.

Two small excavations, carried out in 2005, in the open space to the north of the church, the first next to the bell tower (4,20 x 5 m), the second next to the perimeter north wall (3 x 2 m) have documented, without the possibility of reaching the lower layers for safety reasons, a medieval stratification that started at 1,50-2 m below the ground surface.