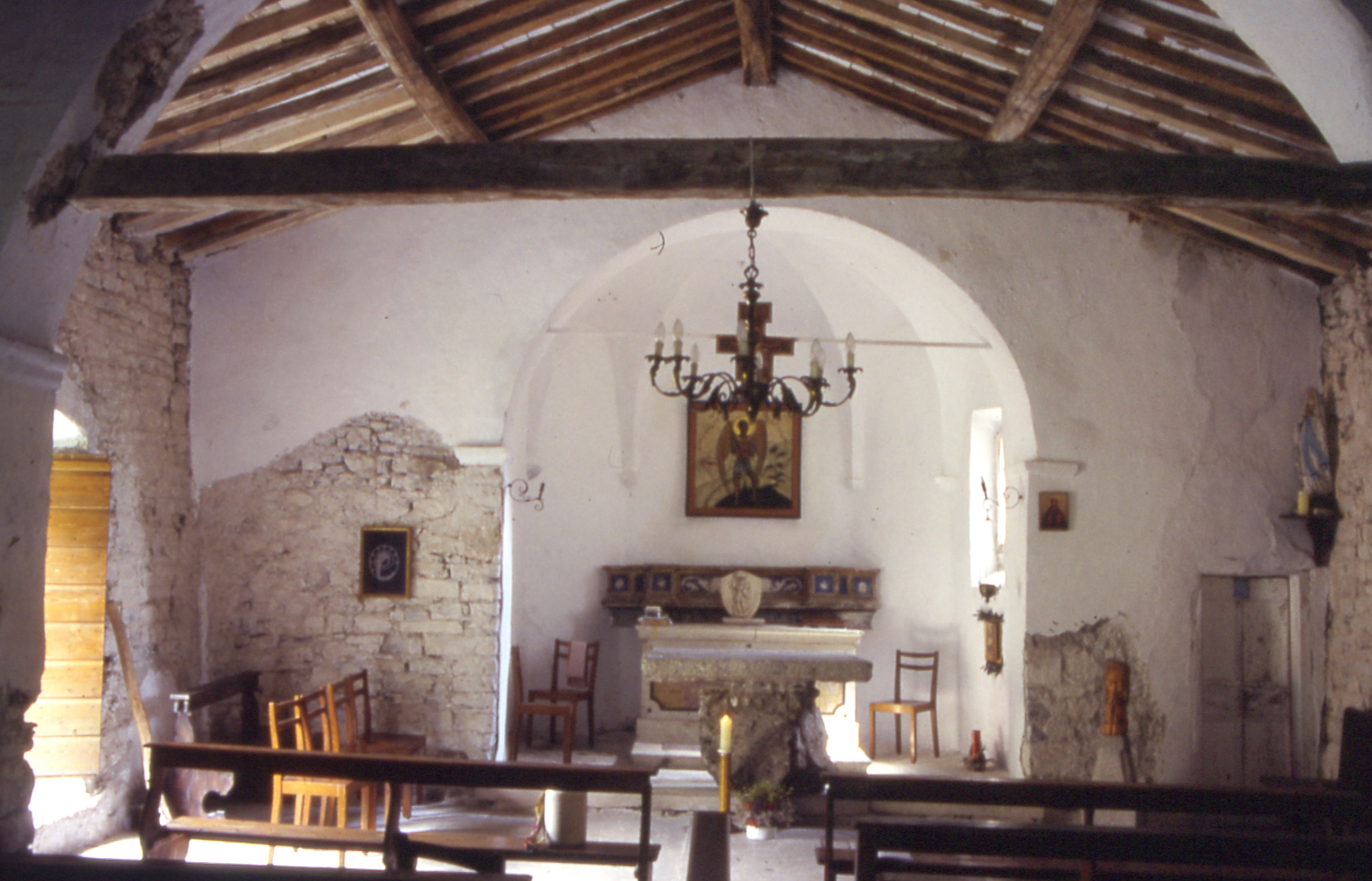 The church of San Michele of Tremosine, mentioned for the first time in the papal bull of Urbano III of 1187, rose on rocky spur at the start of the homonymous valley, where the two roads coming from Tremosine and from Tignale meet, and then branch off along two different directions towards the Giudicarie: the first over the pass of Lorina to Storo, the second going over the pass of Tremalzo descending then to Concei and then on to San Martino of Campi.

The church, 6,75 x7, 30 m (internal measurements), is one naved interrupted in he middle by a rounded archway and terminated with a pentagonal apse built in”opus incertum” and covered with rib vaults, datable from the end of the XVthto the beginning of the XVIthcenturies. The perimeter walls are built with stone blocks of limited thickness and placed in regular coursesemphasized by pointing, a Romanesque technique that characterizes also the lower part of the triumphal arch, conserved notwithstanding the renovation of the apse.

Later are the transversal arch that subdivides the nave and the openings, that break the walling: the entrance and the two windows in the façade, the door that leads to the hermitage, that in the north wall and a third in the south east corner that leads to the small sacristy. These interventions, contemporary to the construction of the hermitage and the portico that connected it to the façadeof the church, were patronized by Veronese priest Florenio Feliberi that, as is attested in an epigraph placed in the east prospect the 2ndApril1679, acts ” del suo proprio da fondamenti”. The benefactor spent his last years in the hermitage where he died in 1686, as testifies the funerary inscription.

In the church there is a reutilization of some early medieval liturgical elements (VIIIth century): four in the north pilaster of the median arch of the nave, a fragment of a small pilasternear the north entrance to the church and a fragment of a moulded base of a small column in the west wall of the hermitage. They provide a terminus ante quem for the foundation of the church, datable from the VII-VIIIth centuries. The antichity is also proposed by the discovery of pottery dating to the late antiquity/early medieval age, slag from a kiln for fusion and a burial excavated in the nineties of the last century found in the portico next to the façade of the church: in a tomb lined with walls of anthropoid form and with agravestone in granite.

The foundation of the church and the liturgical sculptures of high quality could be explained by the presence of iron extraction or a kiln for melting iron near to the torrent at the foot of the church, or by the meeting of the two roads that from Tremosine went to Storo or to the Val de Ledro. On the latter road there is the church of San Martino that could have had the same function of assisting travellers.