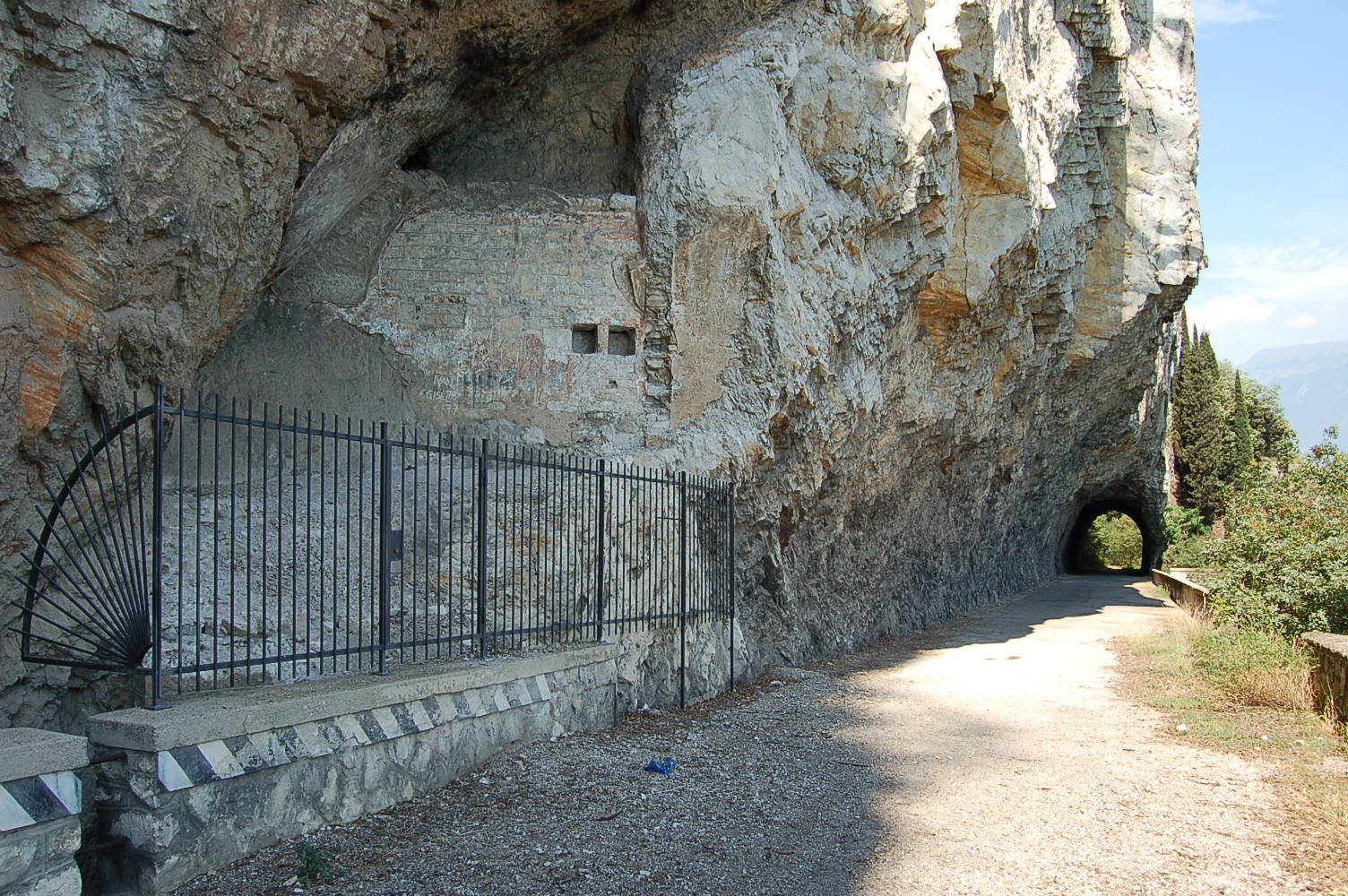 Around the mid-VIth century at Campione and in early medieval times at an unprecised date at San Giorgio in Varolo, there began an eremitic occupancy, that at the second site lasted until the XVIIIth century. This is a phenomenon testifiedin early medieval timesalso in Sommolago (the hermitage of San Brizio) and on Monte Baldo (the hermitage of San Benigno e Caro, dating to the Carolingian Age).

San Giorgio in Varolo is described by Silvano Cattaneo in the mid-XVIth century as “Between the confines of the great mountains and the lake there is a site carved out of the rock, fifty paces long and twenty five wide with some grottoes with walls at the entrances, that are used for rooms, wine cellars and kitchen and that is used as an inn with stairs cut in the rock from which one climbs fifty steps to the higher grotta inside of which there is the church of San Giorgio…before the house there is a comfortable courtyard with a gorgeous garden, full of lime trees, orange trees, lemon trees and other odoriferous and pleasant trees, at the end of which there is another grotta that serves for the tables… and other rustic instruments…”. The site was probably chosen in 1220 by San Francesco as a hermitage before the construction of the monastery of Gargnano. In 1750, it was still in the possession of the friars who claimed the exemption from the church of San Giorgio and from the pastoral visits of the bishop of Trento.
Notwithstanding that it was severely damaged by the construction of a tunnel when the road “il Gardesana” was built in 1929-1931, the structures described by Silvan Cattaneo are still legible: (1) some walled grottoes, then used for rooms, cellar and kitchen (2) an open space between the grottos and the lake, then occupied by a corte assai comoda with a small garden for citrus trees; (3) a second grotto, higher up, to which one ascended by a staircase with fifty steps; (4) what remains of the church is only the presbytery. These structures can be referred to three principal periods: the earliest in the early medieval, the second around about 1000 and the third between the XVII-XVIIIth centuries.
To the earliest phase can be attributed the most internal part of the grotto with two superimposed rooms, separated by a horizontal wooden floor and closed towards the lake by a wall, in large part now demolished. On the ground floor at about 5,30 m above the lake, there is a room of 11 square metres with a mortar pavement and a wooden ceiling, legible by the beam holes cut out of the rock face. The southern tract of the rock face is partially plastered, in which had been engraved before the mortar dried, a fish, a hand, a cross and four petals within a circle. On the superior level there are traces on both the rock faces through some beam holes two artificial offsets in the rock for the installation of a wooden platform.
The grotto is closed by a double wall: the external wall characterized by a face in stone blocks, regular courses with the joints pointed, typical of the of the second phase (XIth century), it butts against an early medieval wall of a width of 1,12 m, conserved for a height of 2,50 m that is made with broken stone and fragments of Roman brick, laid in irregular courses and bonded with a white mortar. 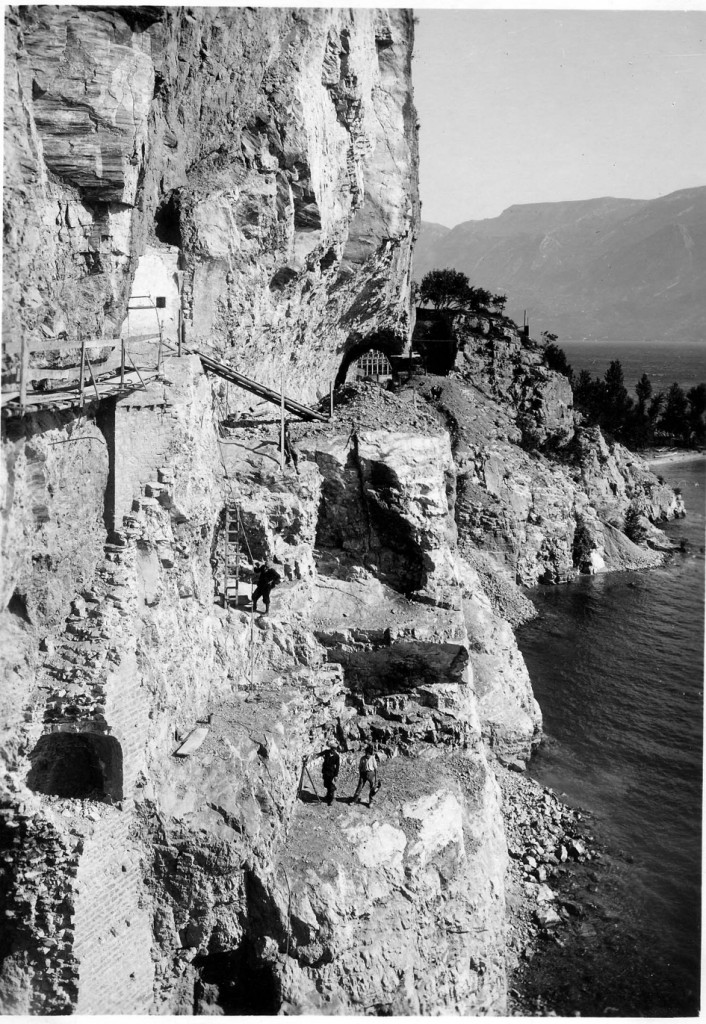 The Romanesque phase sees a general renovation of the site with the construction (or reconstruction) of the small church, in a grotto located at 22 m above the lake. There is only conserved the rectangular presbytery of 3,40 x 4,30 m, delimited at the west, where the altar was, by the rock face and on the contiguous sides by Romanesque style walls entirely similar to the wall that closed the grotto in this phase. The south wall was flanked by another semicircular wall that sustained a staircase legible by the stone slabs inserted in the wall. In the walling the rock face at 11,70 m there has been carved out a small cell 2 x 1,40 m. There could be part of the Romanesque phase another cell on the other side of the grotto, of which is conserved only the imprint in the rock on the west side, covered with white plaster on which is designed a cross with red colour.
In the presbytery there have survived some fragments of Romanesque frescoes: on the western wall a Deesis or a Maiestas Domini with a grand figure of Christ seated on the throne, surrounded by two cherubs; on the northern wall in the higher part episodes of the condemnation and the martyr of a saint, perhaps San Giorgio tortured on the wheel and in the lower half masculine figures perhaps Apostles.

Between the XVIIth and XVIIIth centuries the apse was covered with a rib vault, with corbels towards the east grafted on pilasters presumably pertinent to a triumphal arch. Later than the pilaster are the plaster that covers the barrel vault of the nave on which is inscribed the date 1631. Three new cells are prepared.