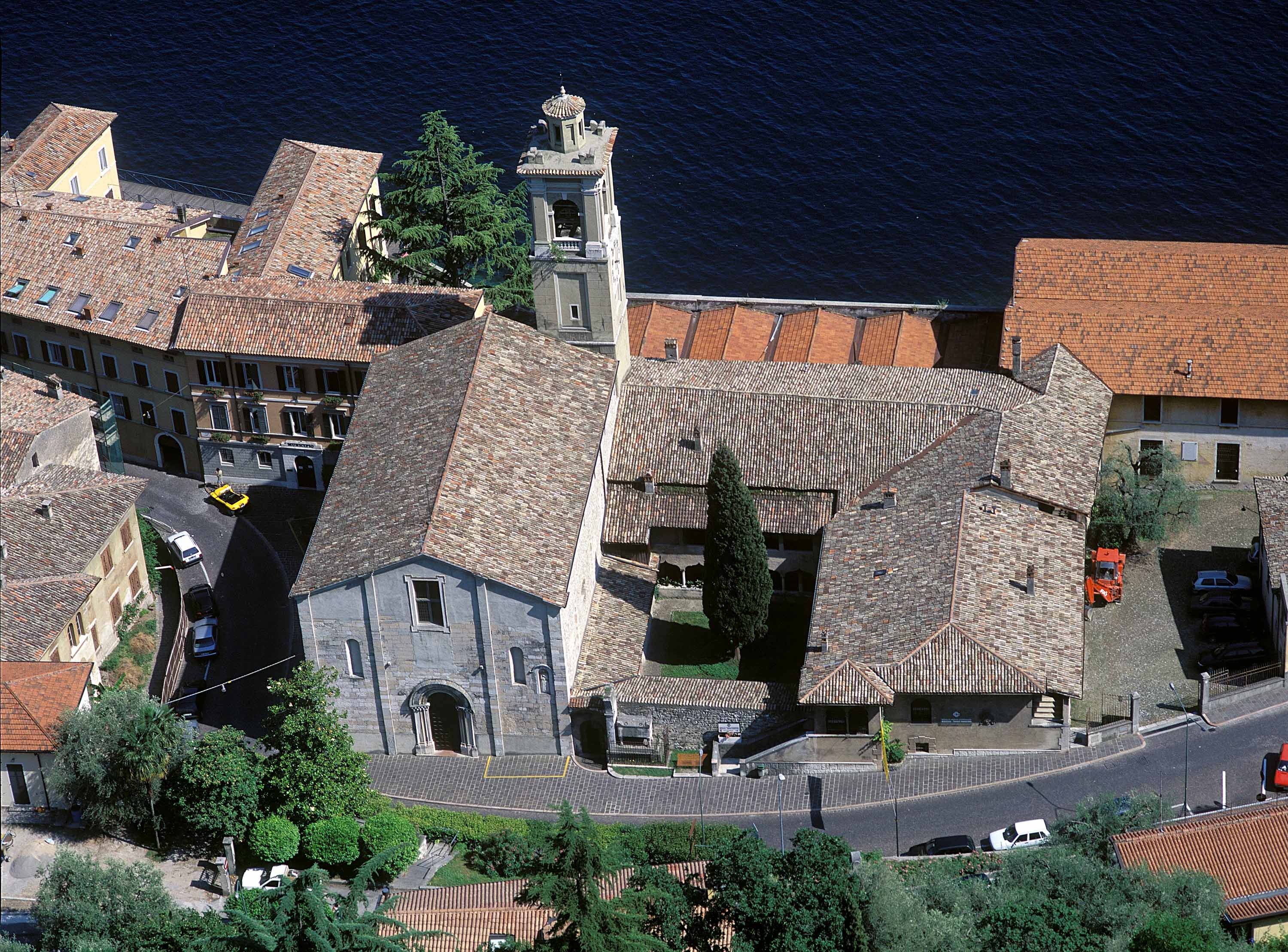 The Baptismal church of Gargnano

The territory is chacterized by a hilly hinterland that has restituted scarce testimony of the Roman age. The area is involved, at least from the Xth century, by the attempts of the ecclesiastical institutions of Brescia to expand their territories and possessions (such as the monasteries of Leno, Serle, Santa Giulia and Sant’Eufemia, present respectively in the X-XI-XIIth centuries) and of northern Italy, for example the canons of the cathedral of Verona or of the bishop of Verona. The possessions of the monastery of San Pietro in Monte were the best organized, in 1200 they held an ospicium monasterii in Gargnano, whilst the only institution that seems to play a role in the religious life of the territory are the canons of San Pietro in Oliveto, as attested in its presbytery in the position of high priest of the baptismal church in 1228.There are not documented the noble constitution rights, present however at the end of the XIth century, when there is registered the feudal investiture by the bishop to the family Ugoni.

The church of San Martino, entirely rebuilt in the XIXth century, appears, from the acts of the pastoral visit of 1566, to have a basilica plan with three naves and a crypt; destroyed as well the church of San Faustino, that rose in the area of villa Feltrinelli and that too probably had medieval origins; by the mid XIIth century the church of San Giacomo was built, subject to the monastery of Santa Giulia and probably a century later to the church of San Francesco. 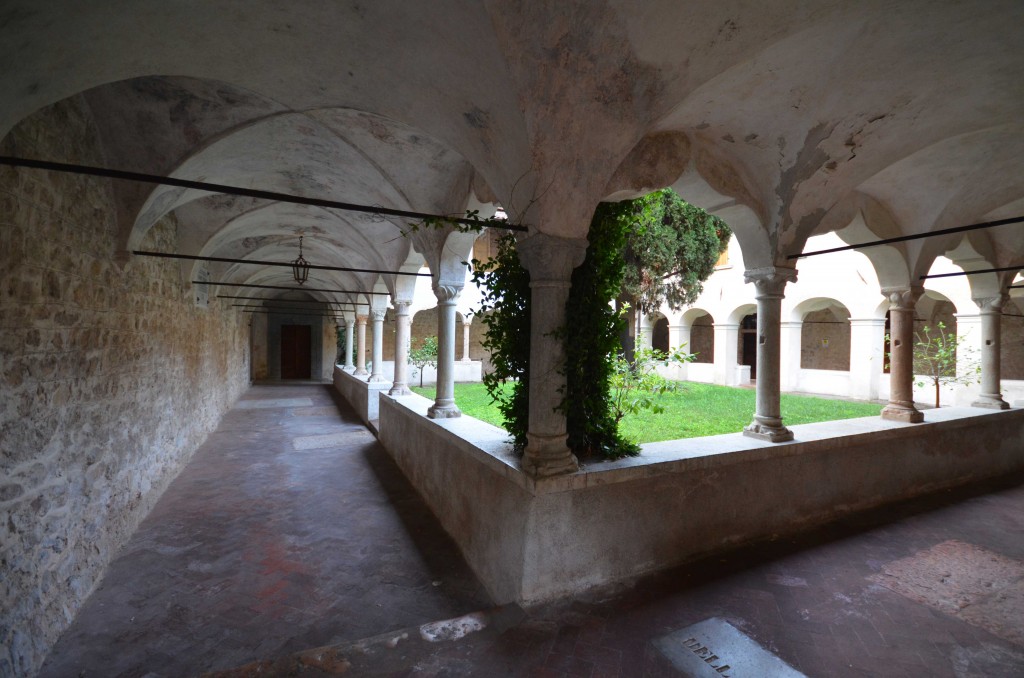 The convent of San Francesco is registered in a papal bull of Nicola IV in 1289, but the Franciscans had arrived at Garda some decades previously: the convent had the custody up until 1769 the letter, now lost, with which in 1266 Bonaventura of Bagnoregio had reaffirmed the permission of Francesco d’Assisi himself to the resident monks on Brescian side of the lake to beg in the territory of Verona. The letter, if authentic, would be an indication of the primacy of the friars on the western side of the lake, and confirm the affirmation of Wadding according to which Francescopast through Garda in 1220 on his return from the Holy Land: at Garda he would have received as a gift or have bought from Biemino of Manerba a house or a field to install there a hermitage. It is probable that the first site was at San Giorgio of Varolo, on the lakeside close to the harbour of Tignale and only afterwards did the friars transfer to Gargnano, in a moment later than the sixth decade: the construction of the church of San Francesco cannot preceed 1254-1265 because it is evident the reference to San Francesco of Brescia, and the bull of 1289 could have been issued not long after the construction of the new place of cult.

The friars, probably, establish themselves in a pre-existing building at Gargnano: in respect to the church, in fact, the building adjacent to the sacristy on the eastern wing of the cloister shows a Romanesque construction technique and is at a level significantly lower than that of the church. The convent seems therefore the outcome of constructive events that are lengthy and complex.

The church might have been built on the site of a chapel dedicated to saint Stefano, as could be indicated by the dedication in the right apse, next to a Romanesque civil dwelling that was then incorporated in the convent built in successive moments: joined to the convent was a XIIIth century building and probably a cloister. A useful indication of the chronology is provided by the monument of Arcillo of Gargnano, originally placed in the north-west side of the cloister and now recomposed in the entrance: the epigraph dates it to 1302. These phases are followed by an enlargement of the building to the west and to the southeast, and a monumental reconstruction of the cloister, that assumed the form that still exists today. The church, as already mentioned, denounces a derivation very limited from San Francesco of Brescia insofar as the tripartite prospect divided by slenderpilastersand reinforced at the edges bylarger pilasters. On the façade, the single high modanated windows with a trefoil ending recalls Brescian examples, that appear less evident in the interior, that seems closerto the architecture of San Fermo of Verona. The present building, in fact, has a nave with the eastern corner wall joining up with the deep central apse flanked by two minor rectangular chapels covered by ribbed vaults supported by conical corbels, successively painted. Of the style of Verona is also the chromatic facing, both external and internal, with the use of white, pink and grey stone blocks.

San Francesco marks the start of gothic architecture in the territory of Garda: it is evident both in the acute arches of the presbytery, in the prospect, and also in the sculpture starting from the portal, distinguished by the capitals a crochet in which heads are side by side with decorative motifs. In the monumental construction of the cloister there are similarities to Venetian models -very evident in the inflected arches – according to a tendency that has precise comparisons in the civil architecture and the painting (one thinks of the contemporary commission of Paolo Veneziano for Madonna con Bambino of Maderno, 1347).Inthe climate naturalistic of the gothic re-enters the capital motifs with the flora of the lake, in particular the citrus trees.