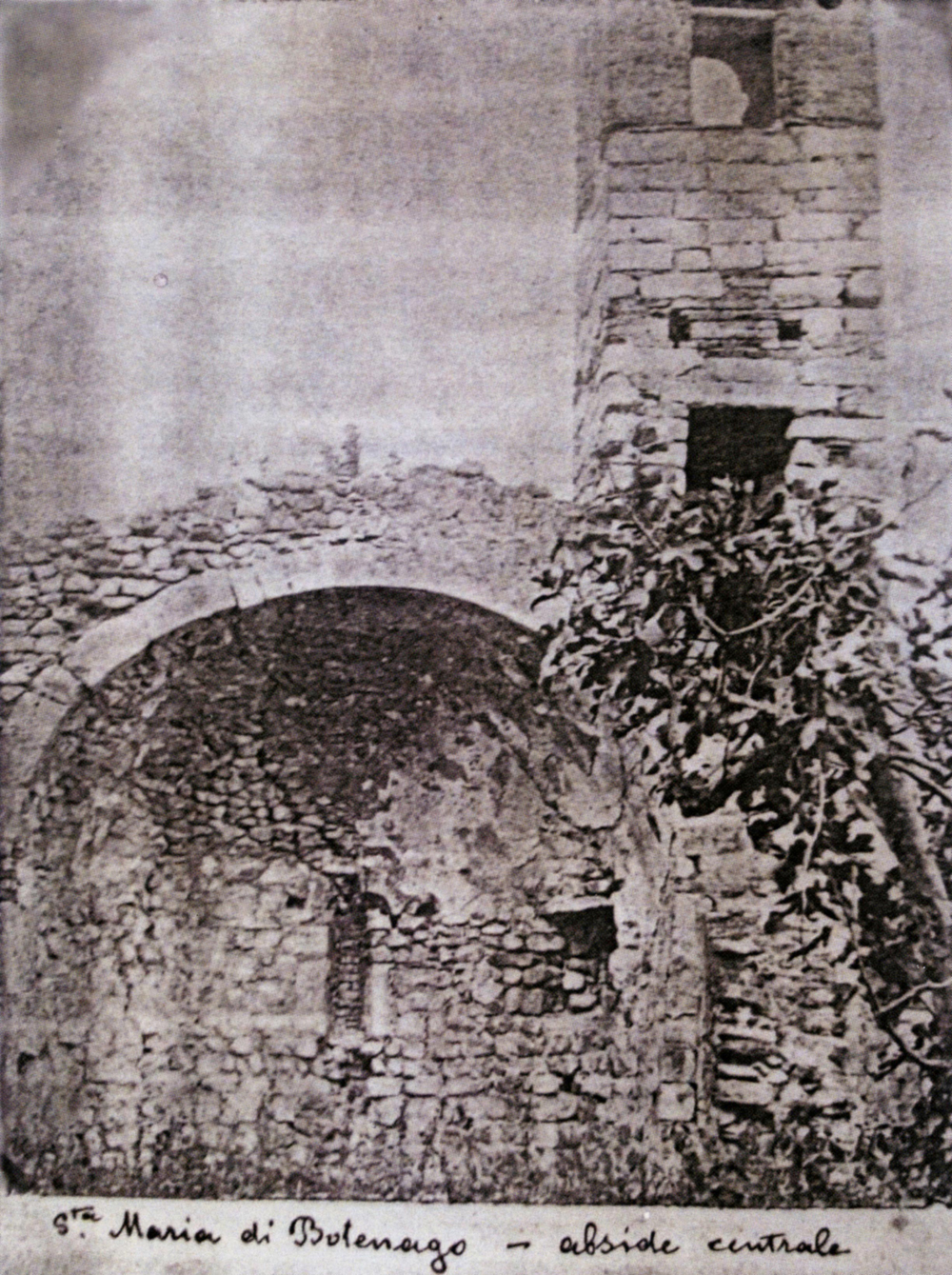 Beyond the morenic watershed, between Drugolo and Bottenago, in Roman times there was at least a village and some rural rustic buildings. An important epigraphy, reused in an early medieval burial at Arzaga of Calvagese, recalls a Claudia Corneliana, cited also in the dedication of a votive altar found in the grandeous villa at Toscolano  (see Toscolano file). On the cippus of Arzaga, the illustrious lady gifts to the coloni of the village a valley exempted from the taxes, in exchange for a perpetual obligation, consisting of an annual celebration in memory of the donor. Amongst the rustic villas of the zone, the best documented is that of Bottenago Roccolino, two of whose perimeter walls with the sides of a small hill of 50 x 60 m. It has two floor levels, separated by a layer of rubble coming from the destruction of the earlier villa that had ivory coloured plaster. The later pavements, at about 1 m higher than the earlier ones were mosaics dating to the IV-Vth centuries.
Mosaic tesserae were also found on the nearby hill of Bottenago, locality Castello, where there was the ancient rural church of Santa Maria Assunta, belonging to the diocese of Brescia. It is recorded for the first time in an act of 28 September 1167 with which the bishop Raimondo, after having consecrated the church of San Michele of Drugolo, renounces, in front of the faithful present, to the jurisdictional rights over the church, that remain instead jointly to the monastery of San Pietro of Serle, and to the baptismal church and the clerics of San Michele. Amongst the witnesses are the high priests of Pontenove and Lonato and the priests of San Pietro al Monte, Montichiari and Arzaga, but strangely there doesn’t appear the high priest of Bottenago. From this solemn declaration of the bishop one deduces that, from the moment that the baptismal church of Bottenago had extended its own influence to Drugolo, it would also have included the chapels of the villages of Carzago and Arzago, if not also of Castrezzone and Calvagese on the outskirts of Bottenago to the north and west. 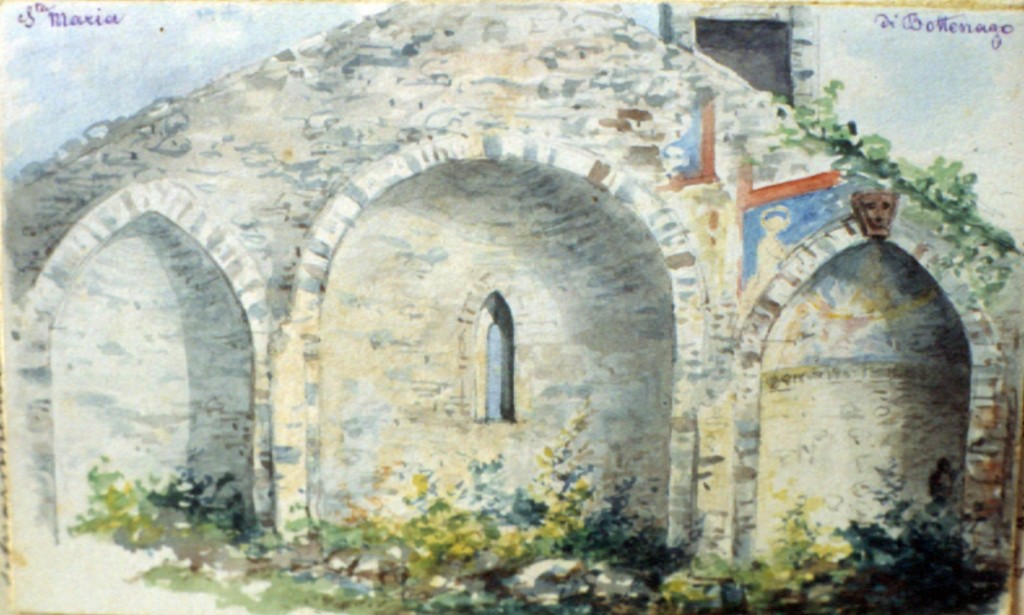 The church, three naves divided by columns, was abandoned at the end of the eighteenth century and was already without a roof and with the columns fallen when it was drawn and photographed by Pietro Da Pontein 1876 who was uncertain if it dated to the XII-XIIIth centuries or to the XIV-start of the XVth centuries. Whilst Gaetano Panazza, in more recent times, thought it to be of the XIIth century. From what one can observe in the drawings of Da Ponte there are various constructive phases: (a) the central apse in broken stone is in “opus incertum” with a triumphal arch in squared stone blocks, externally it was divided by pilasters that join up to a protruding cornice, similar to another cornice in the high part of the walling, a motif that also appears in the apses of San Cipriano at Lonato and of San Donino at Desenzano(see files); in the panels there are three single windows; that in the centre of the frontal panel with a pointed arch, whist in the photo and externally it seems rounded, as are the other two; (b) the lateral apses probably added on have pointed triumphal arches; (c) the belltower is in squared stonework, apart from the belfry that is of a later phase; (d) the façadehas a large rose window and a late rounded portal in stone. Fragments of liturgical sculpture in stone from Botticino, already described as Lombard at the end of the XIXth century when they were reused, as records Fossati, “at the apice of the arches”, there were recovered about twenty or so. Those published, decorated with a zoomorphic head and floral spirals dated to the VIIIth century suggest that there was an earlier church.
In conclusion, from the available information it seems possible to deduce a sequence that starts with a Roman villa, followed by the construction of a church that had a terminus ante quem with its liturgical sculpture and lastly a castle of which in 1891was still visible the double curtain wall and the quadrangular plan as shown in land registry map of 1811.
On the plain to the west of the castle hill, mosaic tesserae, a javelin head, a Roman coin and tombs with grave goods have been fortuitously found near to a villa that was property of the noble Alini, landowners of Bottenago that detained a “giuspatronato” over the church. On the opposite side to the east, at the foot of the hill as far as the aquifer of Mount Canale (locality Campagnoli) an antique regular cadastral unit can be observed in the aerial photos of the fifties and sixties of the last century. All the territory of Bottenago appears therefore highly anthropomorphic, with fragments of Roman brick spread in numerous fields and two Roman epigraphies: one recording a certain Emilio Claro, son of Boxarva who fulfils a vow, the other is a milestone with a double dedication to Constantino and Costanzo (323-326) and to Massimo and Vittore (384-388) that indicates the distance of 6 miles, referred perhaps to the distance from Sirmione of a locality along the via Gallica that passed through Pontenove of Bedizzole at Desenzano. The milestone comes from the church of Bottenago, where it was probably reused as material of construction.
To the south there is Carzago, to recognize perhaps as Carsatjago from a document of 822. Half of the castle in 1123 was the property of the monastery of Santa Eufemia of Brescia; nearby the church of San Lorenzo was built, cited in 1194-1195 in a testimony of Scopardo, consul of Carzago. Near the church is conserved a column drum that is believed to have come from Bottenago.