The Baptismal church of Valtanesi

The Baptismal church of Valtanesi 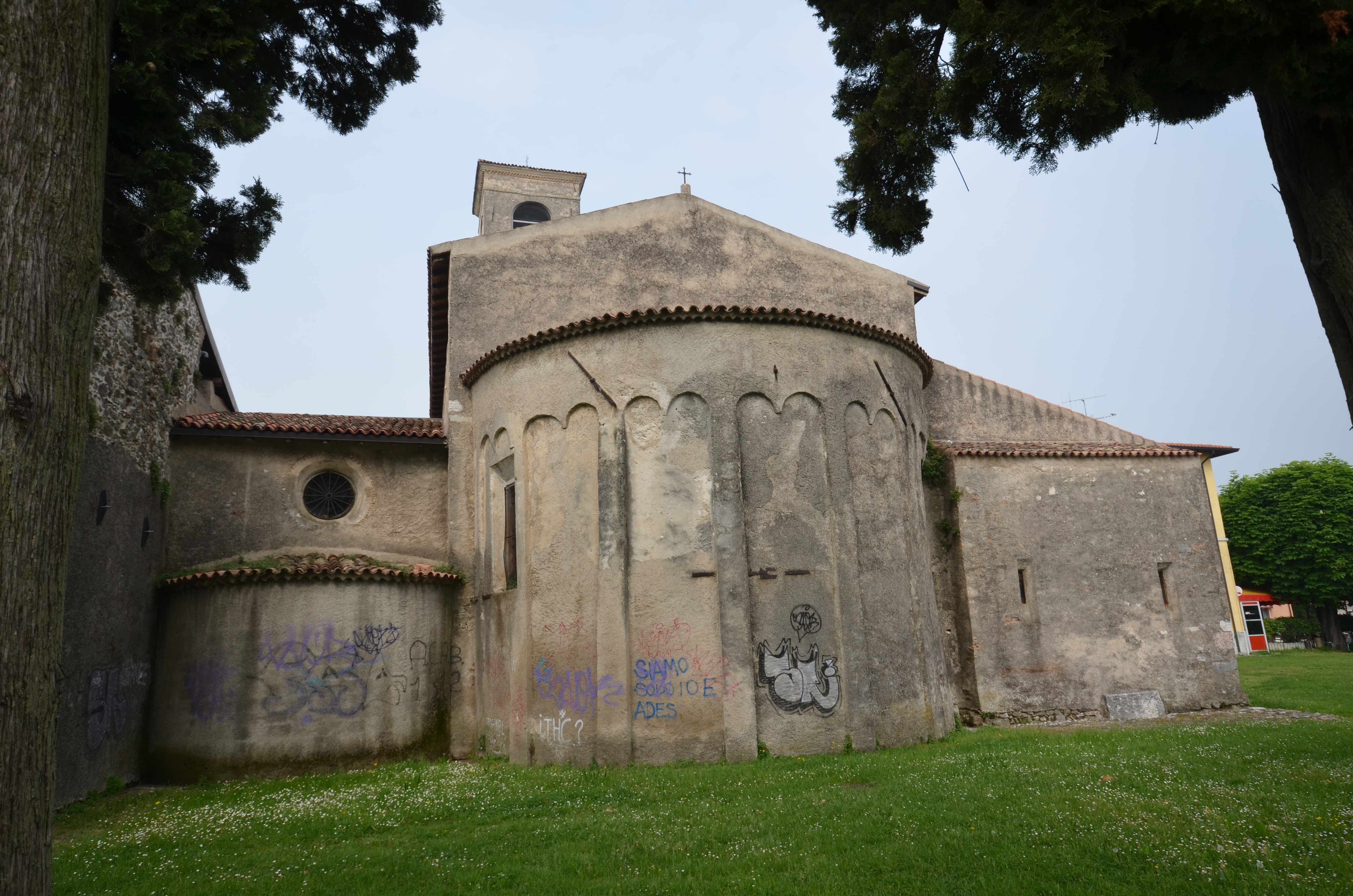 At Manerba of Garda, the testimony of the Roman age include a temple on the summit of the Rocca, some buildings on the western side that are connected to a necropolis in use from the Augustan age to the VIth century, a villa close to the baptismal church and some sporadic finds connected to an agricultural use of the soil.

Near the church, after a lucky discovery in 1931 (tile covered tombs to the north of the church) and after the Second World War, there were two archaeological excavations in 1977 and 1979, a stratigraphic study of the buildings in 2003 and successively an emergency excavation in the rectory.

The sequence includes, after the villa, a phase of occupation with impoverished structures, of which one was a semi-interred house in clay bonded walls and two cult buildings: the baptismal church anterior to the VIIth century and an oratory dedicated to San Siro, one naved with a semicircular apse dated to the late antiquity.

Other than the baptismal church of Santa Maria and the oratory of San Siro, at Manerba there are testified ten other medieval churches. In total they are therefore twelve, a high number that is caused by the territorial size of the town, there privileged relationship with the baptismal church and the intense agricultural use of many areas. The small chapel of San Biagio built on an island of the same name in medieval times, has completely disappeared, but is testified by the pottery fragments found there. Two isolated churches are on the lakeside: San Giorgio (infra) and San Savino. In the latter, renovated in XVIIth century, the south wall with several constructive phases and a fragment of a pilaster from a panel from the presbytery, dated to the VIIIth century, suggest an early medieval foundation and a probable private funerary church connected to a farmstead.

To the Romanesque age is attributed the church on the Rocca, a fortification testified for the first time in 1090. Entitled to San Nicolò and abandoned in the XVIth century, it was exposed in the excavations of the 1970’s. It was next to the second curtain wall and was built in broken stone laid with a certain attention and was one naved with a semicircular apse.

Uncertain is the chronology of San Giovanni Battista di Solarolo, rebuilt in the XVIIth century, incorporating into the north wall a tract of walling that manifestly dates from the VIII-XIth centuries. A late medieval phase, from the XIIIth century, can be seen in west wall of San Bernandino of Montinelle. We don’t have information, apart from the dedication to San Procolo, one of the first Veronese bishops, for a church built on a hill, not far from San Felice, that now has fifteenth century form and on the architrave of the portal, from the following century has an inscription of the high priest of the baptismal church of the Valtanesi (1597-1625 Lazzaro Zadei (LAZ(ARUS)ZAD(EUS), AR((CHIPRESBITER) V(ALLLIS) T(ENENSIS) C.M.: DOMUM TUAM D(OMI)NE DECET SA(N)CTITUDO). Subject to the parish of Manerba until the sixties of the last century, it was sold to a private that transformed it into a house, maintaining the external walls. From the XVth centuries are the churches of Santa Trinità of Solarolo and another two churches, Santa Lucia of Balbiana and Santa Caterina of Gardoncino, cited like San Bernardo in the pastoral visit of 1454. 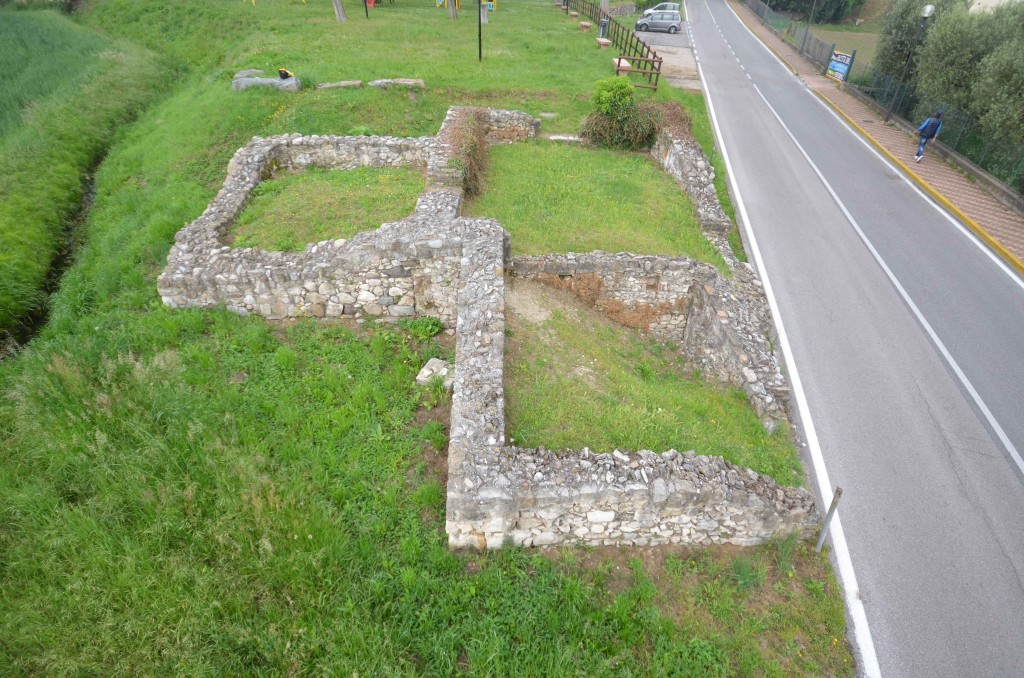 Now Santa Maria is located in isolation in the historical inhabitation of Montinelle a rural area that prior to the Napoleonic reforms was a cemetery, recorded by the iron cross next to the apse. The church is a spacious building with a bell tower in front of the façadeand with the rectory and other rural buildings next to the south wall. The prospect denounces a three naved church; on the eastern side there is visible the large central apse with its flat pilasters of uncertain style that refers it to the Xth– early XIth century. The interior, having lost its ecclesiastical function is now bare, and is characterized by a wide ample central nave separated from the lateral naves by quadrangular pillars.

The baptismal church was built on a small promontory that in a period after the Bronze Age was on the lakeside but later the lake receded a kilometre distant: the area was occupied in the Bronze Age And in Roman times a villa was built, it has not been excavated there emerged numerous decorative elements (mosaics, architectural fragments, coloured plaster), dated from the I- IVth centuries; in the VIIth century a house was built over the ruins, exploiting its building materials.

The stratigraphic excavations (1977 and 1979) have individuated an oratory to the north east of the church: located at a greater depth compared to that of Santa Maria, cited in the pastoral visits until its demolition in the XVIIth century, and it was presumably founded in late antiquity or in the early medieval age.

In 2003, an analysis of the elevation of the church and the annexed rectory took place, but the mortar plaster of the walls has impeded the possibility of a definite chronology of the structures and of an interpretation of the stratigraphic relationships. The interior of the church has never been subject to an archaeological excavation as well as the rusticbuildings to the south and the artificial deposit of about 3m that occupies an area to the east of the church. The analysis of the elevation of the actual building (XIV-XVIth centuries) have allowed a reconstruction of the sequence of the aggregation of the annexes on the northern and southern side to the first church with a nave and a long apse that coincide with the actual central nave.

The first building had a nave with a width of 10,25 m and length that can be hypothesized at 20,02 m: the façadeprobably rose in correspondence with the third pilaster of the actual nave, since to the west of that pilaster there has been revealed the presence of a structure that continued to the north and south; also, the actual façadecuts two early medieval buildings. The nave terminated with a deep semicircular apse illuminated by three windows with rounded arches (1,50 x 0,81 m), blocked and only partially conserved; the central single window conserves the remains of a transenna whose dating oscillates between late antiquity and theIXth century, but it is not possible to see if its in its original position or not.

At least in early medieval times the area of the presbytery was separated from that of the faithful by a stone screen, of which there has been found some fragments.

The north wall has four large single windows with rounded arches (1,35 x 0,75 m) 7,60 m above the ground level, now blocked up and plastered. For the dating of this building, it is possible to observe that the north-east corner of the nave has a walling in “opus incertum” and it is covered by two flat tiles of Roman type: these point to a late antiquity date but in the absence of an archaeological excavation it is not possible to determine if the elevation of the walls are part of an early building or of a reconstruction of the Xth century, even though it seems more likely the conservation of a late antiquity phase and a renovation of the part superior of the apse.

Later to this building a chapel was added onto the southern side with a small apse with segmental arches built in blocks of “tufo” alternated with Roman bricks and the two buildings were connected a large rounded arch adjacent to the presbytery, still visible above the arch of the thirteenth century nave: this intervention is dated to a phase prior to the XI-XIIthcenturies because to the external corner of this chapel there is added on a Romanesque building that also saw the construction of the rectory and perhaps a “xenodochio”.

At the beginning of the XIIth century, in the presbytery of the church, there was realised a rich cycle of paintings: there is recognizable -below a new fourteenth century cycle- the Maiestas Domini on the ceiling of the apse, fragments of figures of saints in the central part and scenes of martyrdom and inscription on the velarium. Afterwards the murals were extended to the nave with a large representation of the Martirio di Sant’Orsola on the north wall: one recognizeswithin a walled city presided by soldiers, the figure of Attila on a throne ordering the execution of a young woman and her husband, The painting was partly damaged in the XIIIth and XIVth centuries by the opening of the arch that connected the annexes to the south and north with the central nave to create a single building with three naves. The same walling techniques in ashlar masonry with use of blocks of red ammonitic and from Botticino characterized the walls of the naves and the new triumphal arch next to the previous arch. The structure receives a new pictorial decoration that proposes the articulation and the themes of the Romanesque phase, with a closeness to the language of Giotto: there are conserved in discreet condition l’Annunciazione on the triumphal arch and the Maiestas Domini on the apse ceiling, whilst more fragmentary are the Storie delle Vergine from the intermediate panel and the velarium in the inferior one.

At the start of the XVth century a fine painter of Veronese culturepainted an extraordinary decoration in the southern apse, with the Giudizio Universale and figures of Sante, that recalls the culture of Altichiero: the very fine pictorial work was accompanied by a very rich deployment of details (the halos, the particular attention to the vestments) in metallic foil, in which one can still observe the preparatory incisions.

In the XV-XVIth centuries the original roof was substituted by groin vault and murals were painted in nave and the sacristy, whilst the residential buildings were transformed. In the XVIIth century an imponent bell tower was built in front of the church.