A decree issued by bishop Raterio of Verona, probably in 966, states that Santa Maria of Maguzzano was founded by a private individual and was then gifted to the bishop, but it does not clarify for how long the small abbey was property of the bishop. It also stated that after the building had been fired by the Hungarians; it was inhabited by a married man with children who falsely claimed to be the abbot, and had tried to corrupt Raterio when he had proposed to reform the situation. But the bishop, having removed the usurper, changed the juridical status of the abbey, sending three clerics who celebrated mass there every day. None of the three could become monks, but formally nothing should change; they had to sing the hymns according to ancient costumes.

From 1289, the castle of Maguzzano pertained to the monastery, where some acts were issued; given the fact that it was not cited in the papal diploma of 1145 which cited other castles that were the property of the Veronese bishop, one can presume that it was built after that date and before 1289.

From mid XIIIth century, the economic condition of the abbey doesn’t seem florid. In 1247 the abbas et conventus ask pope Innocenzo IV to alienate some possessions in front of a grave financial situation. The reorganization of the abbey takes place in the second half of the XVth century, at first incorporating it to the monastery of Santa Giustina of Padua (in 1463) and then from 1491 to the monastery of San Benedetto Po (Mantua), at which it remained until its abolition in 1797 by Napoleon. Straight after passing to the monks of Polirone, there began the reconstruction of the monastery, most of which can be still seen now. It consists of two cloisters; the first to the east of the church was dedicated to the functions of the convent whilst the second was for productive activities. 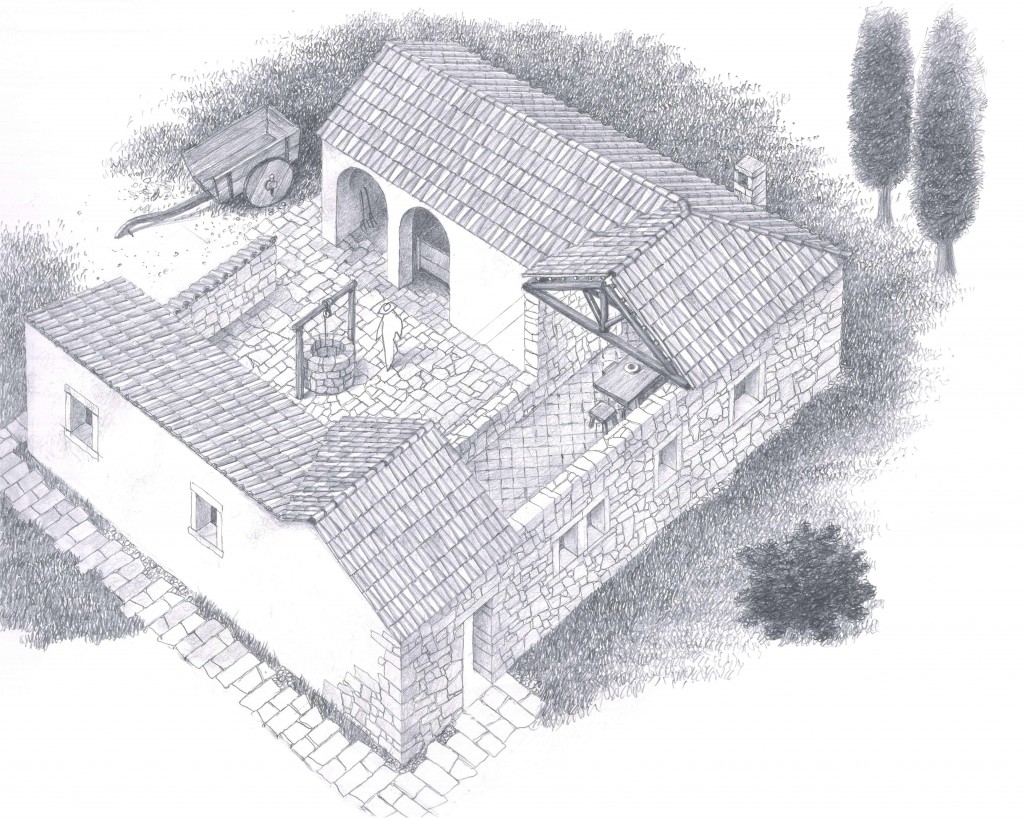 Between 2005 and 2008, an archaeological excavation in the Renaissance cloister, located to the south of the church and surrounded by a portico of 1493 has unearthed a series of finds that, even though out of context, has indicated the presence of a Roman settlement in the area, perhaps in connection with the Roman road between Brescia and Verona, that passed just to the south of the monastery.

The first inhabitation documented was a wooden hut, semi-interred for a depth of 8-10 cm, with a concave shaped floor and angular postholes, typical of contexts from the VI-VIIth centuries.

Later, between the VII-VIIIth centuries, a new building with walls built with material from the morenic hills and bonded almost exclusively with clay, apart from a few traces of friable mortar, and plastered with a poor quality mortar drawn by trowels. A hearth was placed on the clay floor. On the whole, these walls seem to be part of a residential house with rooms placed around a central courtyard, at the centre of which there was a well dug into the morenic sediments of yellowish sandy silt.

In a third phase there is a new reorganization with the construction of three buildings with different construction characteristicsand no direct stratigraphic connections between them, but that exist together for a long time. The first building is similar for construction techniques to that of the second phase, but with a distribution more compact of the rooms. The walls are built with roughly hewn stones bonded in the earliest phase with clay, later with a very coarse white mortar with inclusions of small pebbles. Two rooms have been excavated: the first to the south had white plastered walls, the other with red painted plaster with fragments of figures in the lowest part of the walls and a mortar pavement together with a tomb. The preciousnessof the decoration and the presence of the tomb induce the interpretation of the structure as a funerary building, perhaps a chapel. However, the fragmentary nature of the excavation has impeded the investigation of the area to the east that could have confirmed the liturgical organization of the space and the presence of an altar.

In the south east corner, there was found a one naved church with a semi-circular apse, thatis dated, as a terminus ante quem, by a fragment of pluteus to the first half of the IXth century, Fragments of plaster decorated with figures and mosaic tesserae were probably part of the floor and wall decorations.

To the east of the church, there was excavated the northern wall and the north-west corner (3,45 x 1,40 m) of a third building, constructed with large morenic stone and bonded with mortar and a nucleus of smaller material randomly thrown between the larger stones. Given its massive structure it has been interpreted as a tower. Perhaps it was to this structure that the inscription on a capital, that was obtained from an earlier fragment, referred to: abbas Gezonis fec(it) cooperir(e) hanc turrem.

The three buildings were contemporary in that: (a) they respect each other occupying distinct spaces; (b) the second building has various constructive phases some of which are later than the construction of the church (a radiocarbon dating of the pavement gives aterminus post quem to the Xth century, whilst some finds seem to attest a prolonged use until the late medieval period); (c) the tower is certainly in use with the church and respects the other two buildings.

In the church there were eight burials, one of which, near to the head of the inhumation was an inscription made in the fresh mortar: † UBERTO LAICUS IN PACE R†EQUIES. The calligraphy, the name of the defunct and the characteristics of the crosses date the burial to the X-XIth centuries. Two persons named Uberto were linked to the monastery in this period. The bishop Raterio cites a Hubertu parmensis and another Uberto, the son of Arduino, count of Parma, appears in two documents of 1090, in one he donates a land holding to the church of Santa Maria of Maguzzano, whilst in the other he signs an act of the Rocca of Manerba.

A portico is added to church and the other buildings with a central courtyard with a well in the centre. We have in substance a continuity in the buildings erected around the central courtyard that lasts from the second phase (VII-VIIth century) up until the XVth century when the actual cloister was built.

In the northern sector, there were excavated two buildings, dated to the X-XIth centuries, one of which faced onto a courtyard where artisan activities were documented and food remains were found.

After the demolition of the wall structures of the proceeding phases and the digging of some large pits filled with rubble, a series of preparatory layers were spread to create a work platform for the construction of the cloister of 1492. At the centre of the courtyard there was unearthed a building of 8,5 m width (building XII) that divided in half the cloister of the abbey and is represented on the historical maps.

The excavations have been closed, but in a room of the monastery there is conserved a Roman epigraphy and fragments of early medieval liturgical sculpture, found in 1960’s within the Renaissance church.