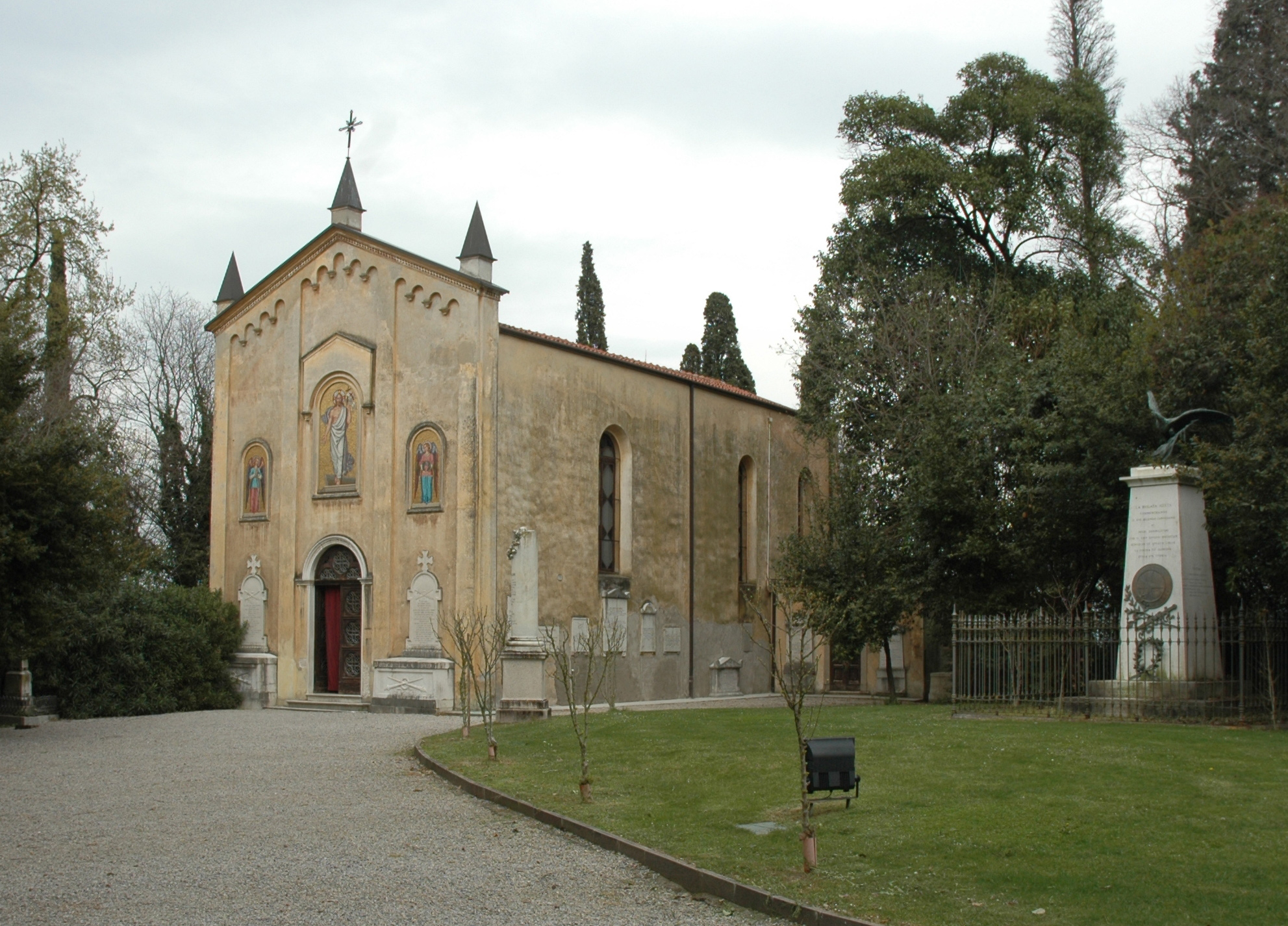 The church is probably recorded in two documents of 1042 and 1111. In the first, an act in which the abbess of the monastery of Santa Giulia of Brescia concedes a “livello” (an agricultural contract in use in the Middle Age) to Domenico, living in the vicus of Sirmione, for an annual rent of 18 denari, arable land, a meadow and a wood of 100 iugeri located in loco Rovedolo (a toponymy for oak) not far from the basilica of San Martino.
In the pastoral visits at the start of the sixteenth century San Martino was subject to the monastery of Santissima Trinità of Verona; the presence of a crypt (fornices seucapellae subterraneae recorded in the visit of 1541) and the poor conditions of the church: diruta et desolata in 1530, tota discoperta in 1541, when the visitor noted that in the past it possessed many properties, ten bought by Girolamo Pedrazzi of Salò, who would have gladly demolished the church to recover building material. Not withstanding that in 1870 the church was in large part demolished and reconstructed as an ossuary for the fallen in the battle of 1859,there was still conserved the three apses and the northern sector of the crypt, whilst the southern part had been buried and the central part of the church transformed into ossuary, eliminating the floor of the presbytery.
The three semi-circular apses, plastered with mortar, can be well seen from the outside. The central one is the highest (about 10 m above the actual ground level) and with a wide diameter (8,40 m externally and 7 m on the inside). In the internal prospect of the central apse, where the mortar has fallen down, one can observe the different building techniques in the walling, the lower part uses split pebbles in “opus incertum” whilst the middle part uses more fragments of reused bricks (up to 8 m in height) with some courses in herringbone style. The higher part belongs to the third phase.
In the interior, there are conserved the central apse without however the pavement, in that the floor level is now that of the crypt transformed into ossuary; the northern sector with the apse of the crypt, covered by a groin vault with, on the western side a low supporting arch that suggests that from this side there was a staircase leading up to the nave probably set against the outer wall.
From what has remained of the standing building one can assume that: a) the church was built on a slope, with the level of the apses and northern wall at least 2 m deeper; b) it’s not clear if crypt existed originally or if it was built in a second phase, the most likely hypothesis considering the apse has been raised; c) in correspondence with the apses, the width of the church is at least 18 m, a very large church therefore, underlined by the pastoral visit of 1541 (where it is called grandis machina). The various different construction techniquesnoted in the central apse suggest an articulated phasing that however can’t be corroborated by other evidence: in particular we can’t say if the construction of the three apses is original or part of a transformation.  As regards the plan, the hypothesis most probable, considering the notable width of the eastern front, associated with a three-apsed termination including a crypt, and the access through stairways to the crypt along the perimeter walls, is that the church had a basilica plan with three naves and three apses, hypothesis to verify either by a research of the archives or an excavation externally to the actual church. With the actual evidence it is difficult to propose a chronology for the hypothetic first phase that could be testified by the building technique of the lower part of the walling in the central apse and has as a reference only the diameter of the apse; to the second phase there could be attributed the groin vault, a structural element that is found in the crypt of San Felice of Pavia, perhaps already in an early medieval phase but with a major diffusion between the end of the Xth century and the beginning of the XIth century. Lastly there is no information on the founders of the church, that, given the size of the building, would certainly have been of a high status and of the functionality of the church, that the document of 1042 refers to as a basilica, whilst the pastoral visits of the first half of the sixteenth century record that it was subject to the Vallambrosan monastery of Santissima Trinità of Verona, founded in 1073, therefore the first citing of the church. In the area the monastery of San Salvatore of Sirmione had property and probably also the monastery of Santa Giulia of Brescia, but we don’t have elements to attribute to either of them the property of the church. 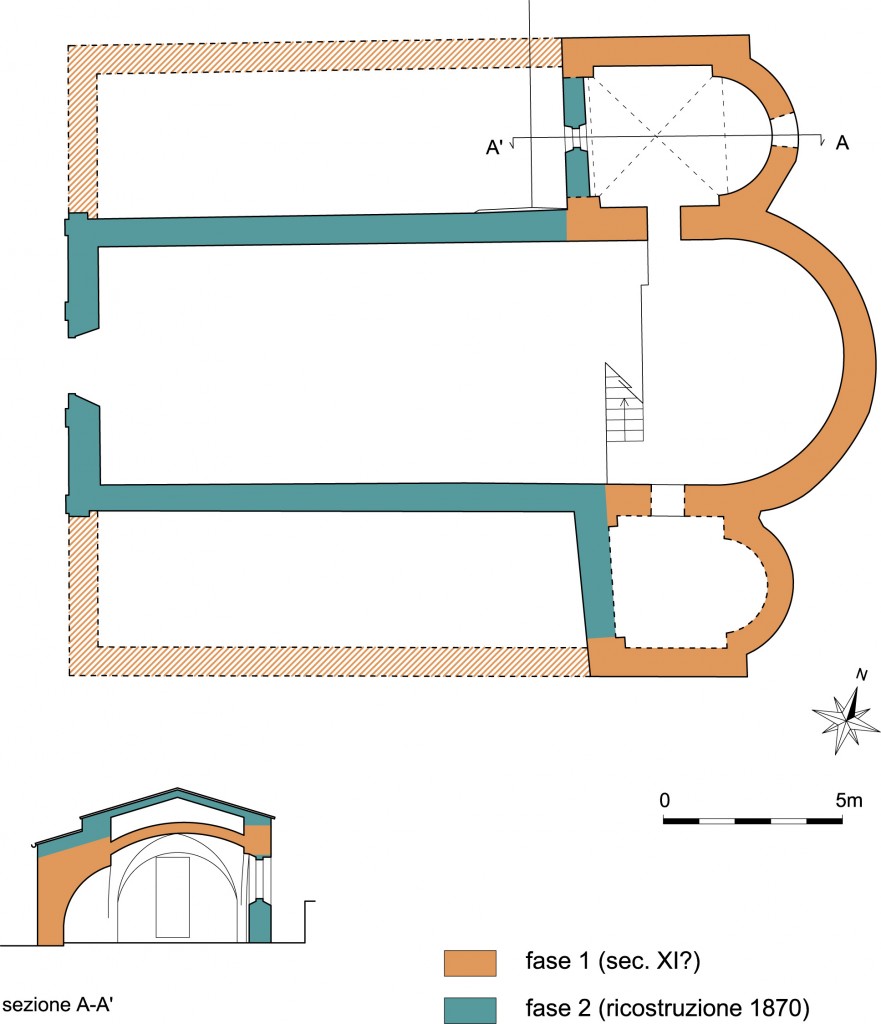