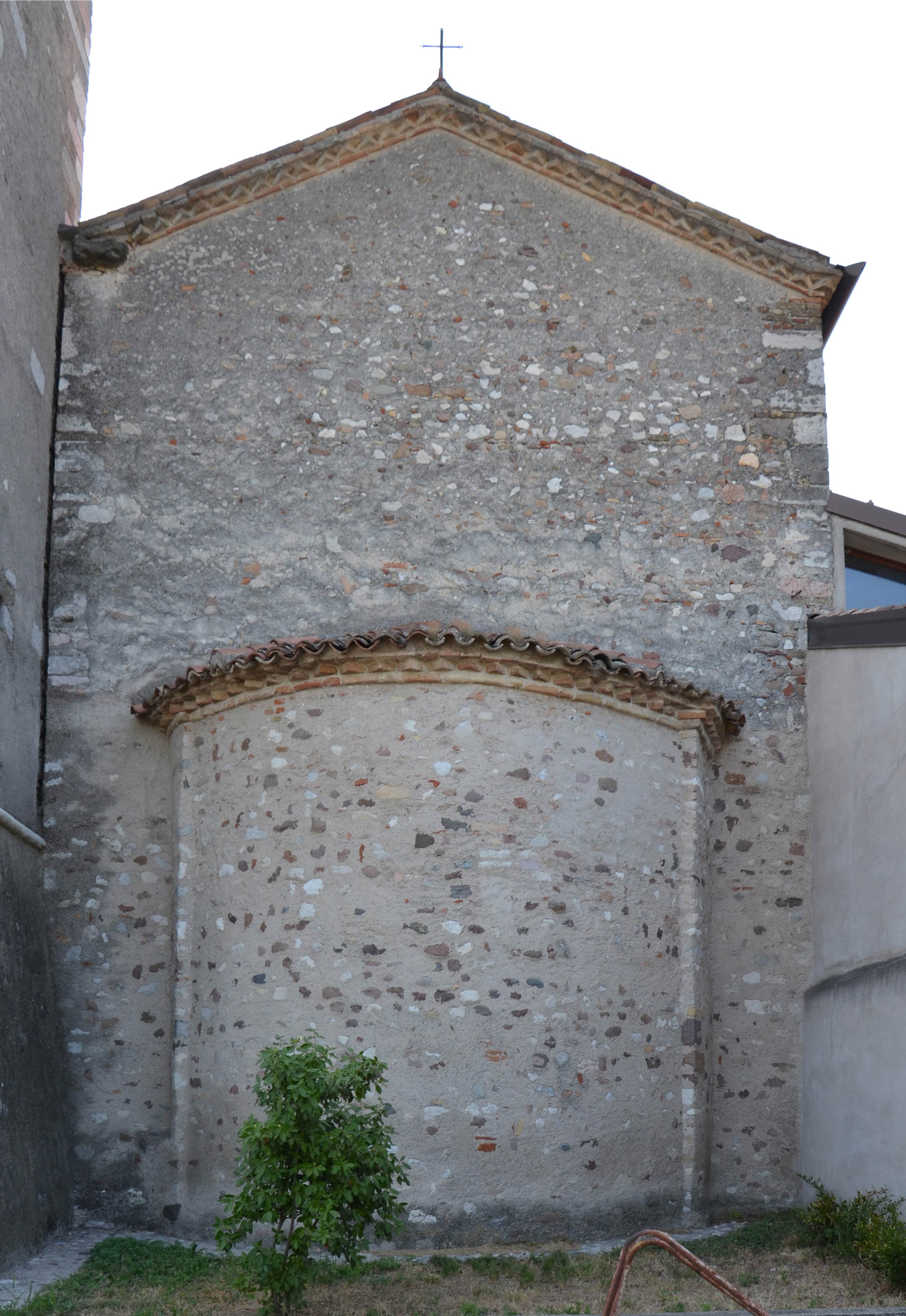 At the end of the XIIth century this area was covered in woods, marshes and canals, although it was becoming increasingly agricultural. This one deduces from documents, in particular one of 1231 on the possessions of the monastery of Santa Maria.
Venzago is the name of a castle and a community that confined with Desenzano to the north, Lonato to the west, and Castiglione della Stiviere to the south, Solferino, Cavriano and Pozzolengo to the east. It was cited in 970 asvilla Vinzago of the committee of Mantua. In its territory one found, in the mid XIIthcentury, two churches: San Paolo and Santa Maria, known as the “covered fountain”. The church of Santa Maria, noted at the beginning of the sixteenth century as ” Madonna della Scoperta”, and cited first in 1163, when Bosone of Cavriano gave a canal and the possibility of using the water for a watermill. From the documents of the XIIth century one deduces that it was subject to the earlier church of San Paolo of Venzago and then of the church of Santa Maria of Manerbio.
Venzago was a town run by a consul already in 1231; in 1291 there was confiscated (from Boccaccio, as hypothesized by Odorici) together with the possessions of Fontana Coperta, in that they were in the hands of the Ghibellines expelled from Brescia, and sold to the magistrate Graziado of Calvisano. In the second half of the XIVth century it was certainly back in the hands of Boccaccio, a family of domini from Manerbio. In 1396, the Boccaccio subdivided Venzago in two parts, one destined to the heirs, the other given as a gift by Giovanna to the count Bernardo or Berardo Maggi. The two properties were singularly acquired by the town council of Lonato, in 1408(the part that had gone to count Maggi) and 1416 (the part that was taken from Boccaccio by the Malatesta, a noble from Brescia, in 1404, and then revendicated by Boccaccio). The jurisdiction of Venzago is part of a long contestation between Lonato and the Riviera of Salò that revendicated the jurisdiction.
Of the castle of elliptical outline there has remained only a tract of the southern curtain wall in morenic pebbles laid in regular courses that formed a substructure for the wall summit, whilst the north side was recently destroyed by the construction of some garages and the earlier buildings on the summit have been replaced by villas and flats. The church of San Paolo, according to Biancolini who wrote in the mid eighteenth century, was built at the bottom of the castle of Venzago and it was reduced to ruins in 1240 when, as claimed by Elia Capriolo, the Brescians destroyed Venzago.  The church is very probably identified with the chapel of which one can still see some remains of the walls on Mount Regina, a hill to the northwest of the castle of Venzago, with which it was connected by a ridge at the height of about 200 m. With a single nave and a semicircular apse, there has remained as standing walls only the semicircular apse and small tracts of the perimetral walls. The walling of the apse, reduced to fragments has a width of 0, 90 m, but it is not clear if it’s foundation or standing wall. The wall building technique, with the use of morenic pebbles and the reuse of Roman brick, laid in irregular courses seems to point to the early medieval age.
The hill on which the church was built was known as the “Queen” and a legend tells of the queen Adelaide, imprisoned on the Rocca of Garda by Berengario II because she refused to marry his son Adalberto, managed to flee to Venzago. The episode is recorded on an epigraphy of 950, noted by Ottavio Rossi in the seventeenth century, who dates it however to 1350: “Adelaide, wife of the defunct king Lotario (II, king of Italy) will live for an entire month at the house of the Brescian bishop Giuseppe”. If the epigraphy was genuine it would provide not only a terminus ante quem for the church, but also a subjection to the bishop of Brescia in the Xth century. Other than the church, as we have seen, there was a domus with a portico, a building that could have been the bishop’s residence as cited in the inscription. Given the position of the church on the summit of the hill, the domus was probably located on the hillside or at the foot of the hill. However it is strange that in the documents of the second half of the XIIth century there is no mention of its location on Mount Regina, but is only nominated as being close to the village of Venzago.  It is therefore not to exclude that the document is false, made in the fourteenth century by the Boccaccio, lords of the area and allies of the Visconti, from whom there was the reinvention of historical memory of Lombardy based upon Lombard personalities or those of Carolingian or Germanic origin. 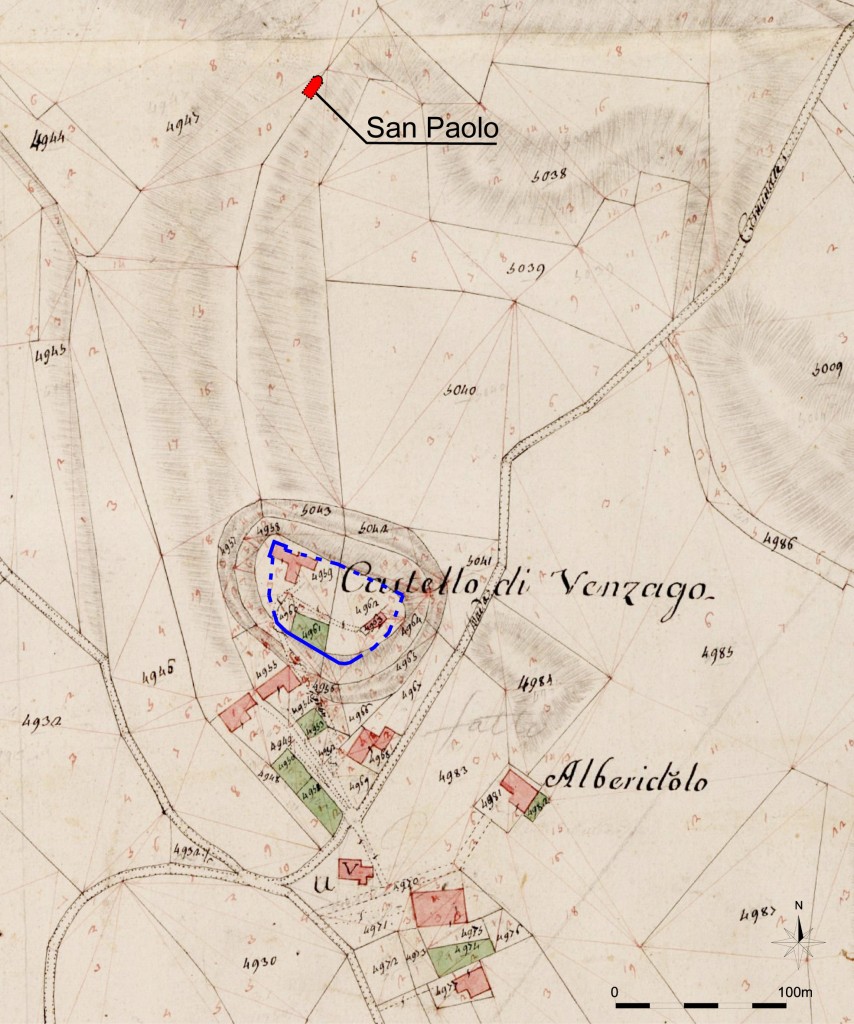 The church of Santa Maria della Scoperta in its present form, with a large dome that contrasts with the small semicircular apse in opus incertum that became a niche in the later large rectangular apse. The apse, difficult to analyse after its heavy-handed restoration, has however a walling in opus incertum, similar to the façade, without angular square stone blocks. It does however have lateral pilasters near to the façadeand one can just see a window that has been walled in at the centre. The high cornice, with brick dentills, is comparable to those on the summit of the façadeand dates to 1602. Although damaged during the heightening of the building, one can with caution hypothize that the small semicircular apse was part of the mid XIIth century building, a terminus ante quem that has for now no other means of clarification.