An Enclave of Trento. The Baptismal church of Tignale

An Enclave of Trento. The Baptismal church of Tignale

The territory of Tignale and of the Valvestino, over which the baptismal church of Santa Maria had jurisdiction, has sporadic testimonies of the Roman age at Gardola, Olzano, Magasa locality Capetel (tombs with grave goods including coins and lamps) and near San Giovanni of Turano (a coin of Massimino). An epigraphy alla Fatae is walled into the rectory at Santa Maria.
A papal bull of Urbano III, issued at Verona the 9th March 1187, that has come to us in a sixteenth century interpolated copy butsubstantially genuine, confirmed by a previous diploma of the bishop of Trento Giovanni. Before 1187, there are two bishops of Trento with that name: one of the Lombard era, the second around the years 900; one of the two prelates, perhaps the first, provides a terminus ante quem for the parish church at Tignale. The Passio of the bishop Vigilio, from mid-VI th century to the beginning of the VIIth century, alludes to 3 churches built by him in the territories overseen by the bishops of Verona and Brescia. In reality the process of the conversion to Christianity had taken place over at least a couple of centuries and it is probable that the territories of Tignale and the Valvestinawere evangelized not before the fist half of the VIth century, when the area began to break away from Brescia.
In the papal bull there are indicated eight churches subject to the baptismal church of Santa Maria (near to which are the baptistry of San Giovanni Battista and the cemetery): the chaplaincy cured by San Giovanni Battista at Turano with its cemetery, the chapels of San Virgilio of Droane (with its cemetery) and of San Pietro, the oratories of Santa Maria in Monte Stelle, San Zenone of Prabione (with its cemetery), San Ercolano at Campione and San Giorgio at Varolo. For all of these we have a proof, or at least strong clues, that they were founded before 1187. 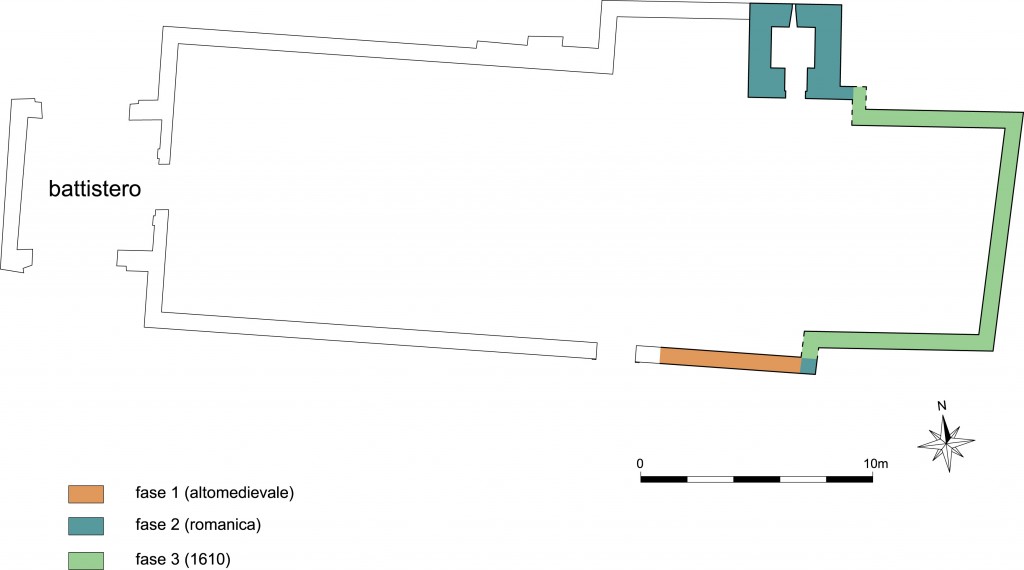 Santa Maria Assunta
The present church is the result of four main constructive phases. Of the first phase is a tract of walling in the south perimeter wall, visible on the first floor of the rectory. It is in “opus incertum” with the stones bonded by abundant mortar. To this walling the corner of the east wall is added on, that with its regular courses in well-hewn stones, highlighted by the mortar pointing is typical of the Romanesque age as is that of the bell tower (with the exclusion of the belfry and the pinnacle of the XVIIth century). These have large angular pilasters, with high slits in the east and north walls and the use of split stones and fragments of bricks bonded with abundant mortar. The original baptistry, probably external and in axis with the church, as at Tremosine, must have been demolished before 1579-1581, when it was recorded as being inside the church. In the XVIIth century the presbytery was rebuilt. Lastly, in 1954, the nave was largely rebuilt because it was threatened by structural collapse.
On the basis of this information it is possible to deduce a sequence that includes: (a) a first early medieval church with one nave and a probable semicircular apse and a separate baptistry dedicated to Battista. This building, anterior to bishop Giovanni, could be of the VIth century; (b) the Romanesque reconstruction of the apse together with the construction of the bell tower; (c) the renovation of the apse in the XVIIth century with successive enlargement of the nave to enclose the baptistry; (d) the partial reconstruction of the church in 1954.